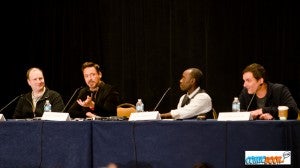 Since the Iron Man 3 panel itself is expected to be more or less overwhelmed by other Marvel Studios news, the press conference was a good chance for the filmmakers to talk with the media specifically about their film, without the chaos and mayhem of any future announcements or guest panelists. Unfortunately, though, it also meant no look at the footage for another hour. Ah, well.

Marvel's Kevin Feige told reporters that he isn't concerned with competing with The Avengers in terms of an ever-escalating series of big moments and big set pieces. He says he's more concerned with "getting a ton of thrills in a short space and making a nice little stew for you."

Asked about the Iron Patriot rumors, Feige said, "The not fun thing is that it's online and you don't really have any control over that kind of thing anymore. The fun thing is--the reason it was online is because it's a real practical suit that was on the set and somebody took a picture of it. It's an actual, awesomely-designed suit that Mr. Cheadle does get to wear at certain points in the movie."

He conceded, "And certain days on the set, not as fun." They are, of course, shooting in the summer in North Carolina. "The more uncomfortable for the actor," Feige joked, "the more satisfying for the audience."

"The fun thing for us just in terms of the fans and the fan blogs is just how much of the guessing is so wrong," Black said. "Completely off-base. I said, 'Let's just get somebody to walk around as the most obscure Marvel villain ever--we'll get some costume at KMart and have that show up. We love the rumors--we love that, that's fun."

"Jon Favreau is available to give me all kinds of tips and advice," said the director when asked what surprised him about working with Marvel. "He gave me the transitional feel I needed and Marvel has such an effective special effects machine that they could walk me through the process, hold my hand and make sure that I was free to concentrate on the story, character and scale. I said, 'I want to do this,' and they said, 'Here's how you do it.'"

"Avengers I think even surprised us to a certain extent," Robert Downey, Jr. told a reporter who asked what impact that film will have on the way they go forward in Iron Man 3. "Looking back on it, you can kind of dissect why it was the right movie with the right people and the right director at the right time, and we feel kind of the same way about this."

In terms of character, he said that he wanted to get into Tony's other relationships besides the one with Pepper. "I feel that Rhodey and Tony have not been explored as much as they might be," Downey said, "and that in the comics was a huge part of what was great about him." He also said that he was interested to see what kind of new limitations would be thrown up in front of Tony, "so that I can, as usual, ignore those limitations."

"I think the way to go about doing a [third movie], if you're ever in that position as I'm lucky enough to be," Black interjected, "you've got to find a way that the first two aren't done yet." He said that the ideal goal is that by the time viewers finish watching the third movie, it should feel like part of a trilogy organically.

We're taking a break to cover the panel itself now, so check back with us soon for highlights from the second half of the press conference, as well as a ton more photos.