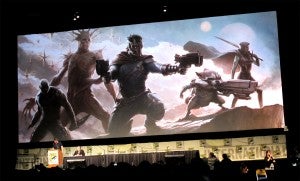 Marvel Studios is coming to San Diego Comic-Con International to promote Iron Man 3, and they're bringing all of their other toys with them. In a panel that's expected to deliver at least one, possibly two other major announcements in addition to bringing the cast and filmmakers behind the star-studded sequel to Ol' Shellhead's adventures front and center, there's more anticipation built up around this panel than anything else so far at Comic-Con.

Keep refreshing or returning to the site as we update in realtime, and keep checking back with ComicBook.com as we take a more in-depth look at some of tonight's announcements.

The panel is opening up now, with a montage of previous Comic-Con presentations, with a final title card reading "Phase two begins now." Marvel President Kevin Feige took to the stage to let the fans know that Iron Man 3 is now halfway through production, and that Thor 2--which will be called Thor 2: The Dark World--is filming in London right now. The second Captain America film will be Captain America: The Winter Soldier.

Feige shocked the audience by not only announcing Guardians of the Galaxy, but by showing concept art as well, including a painting of Rocket Raccoon. Apparently the team will be heavily influenced by the Abnett and Lanning years! (Thanks to ComingSoon.net for the photo)

They've also been joined by Edgar Wright, who talked a bit about his Ant-Man film and is showing test footage from the production. You can read more about that footage at the link above.

In a black suit with red highlights, Ant-Man darts past two guys guarding a door, where he's tiny. He darts to the end of the hallway, grows to full size, charges the guards, then darts down to pint-sized again. He darts, grows, darts, shrinks, slides down someone's tie, grows and knocks him over, goes into an elevator and disappears into an Ant-Man title card.

Next, it's Robert Downey, Jr. who comes onstage to introduce an action-packed piece of footage from Iron Man 3. In it, Tony Stark--talking to his suits--asks someone called "Dummy" to introduce them to their "baby brother." He calls some armor onto his body from across the room, and it works well until he's hit in the groin by one of the pieces and falls down. Ultimately one of the pieces causes him to fall, but then jets itself up with him. The faceplate finally joins him last, and it's Iron Man playing to a crowd (just like here).

We then see him talking to Happy, in a little bit of a joke. "That's because you quit!" Downey tells his former director when Happy tells Tony he doesn't work for him anymore. Apparently Happy wasn't comfortable with the Avengers Initiative.

Guy Pearce makes his first appearance, as does the Iron Patriot armor discussed at this afternoon's press conference.

"Some people call me a terrorist," comes a voice. "I consider myself a teacher. Lesson number one: There is no such thing as heroes."

A gaggle of helicopters attack Tony Stark's oceanfront home, destroying all of the armor inside and knocking the entire structure--with Tony in it--into the water. Then, almost right away, it's Ben Kingsley as The Mandarin. In case the look (and the rings) alone wasn't enough to convince you, the clip is over now and even the panelists are saying it.

Robert Downey, Jr. is onstage again wearing an Iron Man-themed shirt and tie and one of the repulsor gloves from the film, telling the audience that he's finally living up to his own expectations; he expects any given movie he's in to be one of the three biggest movies ever "and it's finally happened." He also thinks that shawarma sales have skyrocketed because of him, which is likely true.

As they said at the press conference earlier, Downey tells the audience that it's Kiss Kiss Bang Bang, his last film with director Shane Black, that won over Marvel and got him the role as Iron Man. Now, Black (as well as Marvel President Kevin Feige and actor Don Cheadle) are onstage with him.

"We're about halfway through it," Black tells the audience, "and if we don't f--k up the rest, it's going to be great." He's assuring fans that it won't end up like Spider-Man 3.

They announced that Stephanie Szostak, of The Devil Wears Prada fame, will be in the film as an unnamed female character.

The cast and crew are having fun. Jon Favreau is onstage likening watching this film develop to being a grandfather: You can enjoy the kid without the diapers. Cheadle says his armor takes half an hour to get on him, while Downey gets into his in a minute, and blames racism. Downey defends it on the grounds that Cheadle gets better guns.

That conversation continues when a fan dressed in a great Iron Man costume thanks Downey for the loan. He says it only took him five minutes to get into, which upsets Cheadle visibly.

Director Shane Black: Robert Downey, Jr. IS Tony Stark. We're trying to find the roots of Iron Man in this film. That said, apparently Black doesn't consider "Demon in a Bottle" key to the character, as he tells a fan who asks that alcoholism won't play a big role in this film. ("He's got the plug in the jug," Downey chimes in.)

The cast, now, is taking a little time out from the madness of this panel to sing happy birthday to a girl in the audience. Her question? What color would Downey like the suit to be? "Does mauve offend anyone?" He asks to laughs.

Whether or not Bruce Banner will appear in the film is unclear; according to the panelists, Stark "left him at the Port Authority" after the pair drove off together at the end of The Avengers and he'll be seen again, but they didn't say exactly when or in what capacity

As the panel starts to wind down, they're showing the Iron Man 3 footage again, giving fans another chance to look for Easter eggs or clues to the story.