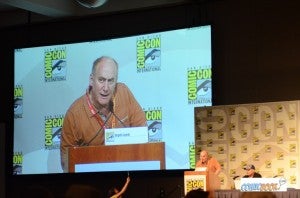 Marvel Television chief Jeph Loeb is leading a panel from San Diego Comic-Con International right now; we'll be liveblogging as it goes. After stoking some local spirit by asking fans whether they think New York fans are better than San Diegoans, Leob began the panel proper. "Welcome to the Marvel Television Panel," he joked, "the only panel that tells you the truth!" He announced that not only were there free buttons at the show and at the Marvel booth, but that you can hover over it with your Marvel AR app to get a secret message. We'll look at our button later for more details. Telling fans they weren't allowed to take photos and video of the panel, he joked, that he knows it's cool to post them online, but "find yourself a cat that looks like Hitler and have a good time." In January of 2012, of course, Marvel opened their own animation studio in Burbank, California, and Loeb screend a Marvel mash-up video to show off "some of the fun that we've been having." Starting with a Marvel Mash-Up parody video featuring old Fantastic Four animation. Loeb teased Hulk and the Agents of S.M.A.S.H., asking fans how many had seen The Avengers and said that because they knew Mark Ruffalo's performance as The Hulk would be a breakout performance this year, they wanted to be sure that the fans of the animated universe would have an opportunity to enjoy more of the character as well. The cast will include the gree, red, blue Hulks with Skaar and a new character called A-Bomb, and then he screened an animation test for the show, which he reminded fans was not final animation or voices. The clip showed the group of Hulks alternately spouting catch-phrases, squabbling like a family and smashing an alien race of strange buglike creatures, all only moments after Green Hulk shattered the camera lens while angry at his alarm clock. "I know that there are enormous fans out there, including myself, of Avengers: Earth's Mightiest Heroes," said Loeb. He implied that the show is not actually going to be cancelled and that rumors of that sort should not be taken too seriously until it's said by himself or Marvel. He claimed that the show was always supposed to run for 52 episodes, and that when the series ran its course, they were unsure of exactly what to do with it. "We're going to transition out just the same way we do in comics," Loeb said, likening the change into the new series, Avengers Assemble, will be a continuation of Earth's Mightiest Heroes' continuity but using the beloved characters from the movie. "Hopefully what we also have is our next step in where we are for animation," said Loeb, and screened an animation test of the series.  With plenty of callbacks to the movie, including Hulk and Thor roughhousing and the in-helmet Iron Man camera, the test footage showed the team facing off against a giant monster that appears to be Fin Fang Foom. He then released a test reel that shows off some of the upcoming Marvel Knights Direct to DVD films, including Wolverine: Origin, Wolverine: Weapon X, The Inhumans, The Eternals and Wolverine vs. Hulk, among others. The Ultimate Spider-Man second season was teased, including a showdown between the cast and a number of the "less-traditional" villains of the Marvel Universe including characters like Kraven and The Rhino. After that, he screened the upcoming Spider-Ham episode of Ultimate Spider-Man.