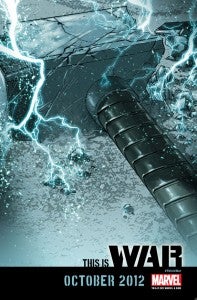 "This is war," teases a pair of images coming out of Marvel Comics today. With a date of October 2012, the posters depict Thor's hammer Mjolnir and Wolverine's adamantium claws, and in both cases the the shot looks like violent and damaging events happening in the middle of a pretty bad situation.

"Find out more Sunday, July 15th  at the Amazing Spider-Man panel, 12:30PM PST, during Comic Con International 2012!" Marvel teases in a brief statement attached to the Thor image, in which they remind readers that fans who can't make it to Comic-Con can still follow along with Marvel's major announcements using their Marvel Events App and the Marvel Events website, where realtime panel coverage is available to anyone with an Internet connection during major conventions, complete with teaser and cover art for the projects in question.

Bleeding Cool, where the Wolverine image has shown up, speculates that the teasers in fact represent the first official teasers for Brian Michael Bendis and Bryan Hitch's upcoming Avengers event, Ultron War. Bendis has teased the story for years, telling fans that it would be his last big Avengers story before moving onto other things; and recently he confirmed in an interview with ComicBook.com that a move off the Avengers titles would be forthcoming. In that same interview, he alluded to fan reactions to his Ultron stories quite a bit. 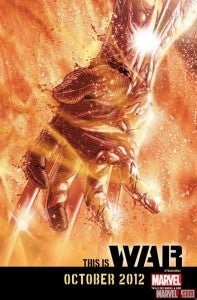 Back in May, Marvel reissued The Avengers #12.1, one of Marvel's "entry-level" Point One issues that was made by Bendis and Hitch, as the Free Comic Book Day issue Ultron War #0.1.

We won't know for sure whether these posters really do represent our first official look at Ultron War, but it seems likely. Apparently we'll find out at the Amazing Spider-Man panel.