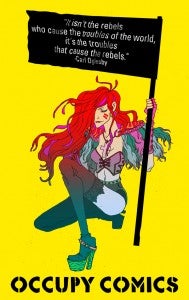 "I'm here because somebody thought it would be an interesting idea to invite me," said David Lloyd, the artist of V for Vendetta, who says that he "accidentally" created the iconic mask that's embraced by so many in the Occupy movement.

"We've always tried to infuse some kind of political idea into our comics without hitting people over the head too much, to varying degrees of success," admitted Zane Grant.

On joining the anthology, Pizzolo said, "In the very beginning people were very nervous about it or ambivalent" but that Frank Miller's anti-Occupy tirade motivated people to get involved. The inclusion of people like David Lloyd also helped make more people embrace it.

"The people who came onboard, I was really happy to be involved alongside," said Ebb. While she wasn't activelyi involved herself, she said her friends in New York were involved with the Occupy movement outside of comics from early on.

"In England I was contacted by the BBC as soon as the mask became predominant in the Occupy movement. I was being contacted by lots of people about what I thought," said David Lloyd. "I was in New York at the New York Comic Con last October and I went down to see the Occupy movement when it was still there and the cops hadn't pushed it out, and I was really impressed by everything that was going on there. All the stuff that the government puts out--that the cops put out about what was happening and the drugs and all that was all rubbish of course. Everybody was looking afte rthings very well. They had a library--they were cooking, they had details, everybody was looking after everybody else. Of course you had some people who were just homeless and seeing the Occupy movement as someplace they could just hang out and maybe get some food in them but it was a great thing that was going on there. He expressed concern that "the impression that the media was giving was just a bunch of people who were rebellious youth, pissed off at authority and just carrying on. It was all crazy because there were people from all kinds of ages there, and it was fantastic, but it was all being suppressed by the authorities." 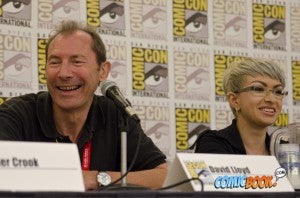 The creator delivered a long speech describing what he'd seen at Occupy, saying that he felt like Americans were disillusioned with both of their political parties.

Touching on the issue of press coverage, Cagle said that she agreed with Lloyd's assessment.

"The local media in Oakland is horrendous. It's a really poor town and it's a really bad scene, so I knew the coverage was going to suck. I'm a freelancer and I didn't have anyone who was going to buy the story yet but I knew I had to cover this," she said. "I felt that desire because the media has done such a horrendous, horrendous job from coast to coast."

Even on an Occupy panel, though, not everybody was particularly positive about the movement. "I ended up having that unfortunately prevalent experience of disappointment," Ebb told the crowd. "I saw really huge signs that said 'bleep the police,' things that had nothing to do with the issues at hand, and it made me really sad becuase I'm familiar with a lot of people trying to do real work." She thinks, though, that the comic is "a nice little sort-of launchpad to get people excited and involved." 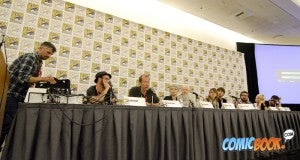 "I'm from New York and I went last year when it was Zuccotti Park and it was just beginning," said Rosenbergh. "To be honest, [the clearing of the park] didn't affect the story I wanted to tell. I wanted to combat an idea that the media put out which is the idea that Occupy was the anti-TEA Party movement, that it was a voice to combat that. I don't think it is at all; I think it's an idea of social justice, an idea of trying to correct wrongs and it's not right-wing or left-wing or anything like that. There are certain elements that some people would say are very left-wing ideas but for me it's a very human story and it comes down to how you think people should be treated. That's the story I wanted to tell because being down there was seeing people who believe other people should be treated fairly. It was important for me to tell a story that was just a human face to people losing their homes, feeling disenfranchised by things that had happened. I doin't think that's a right-wing clause or a left-wing clause. I doint' think that bank fraud and home foreclosures is something that the TEA Party should stand for any more than the Occupy Movement."

Lloyd, again, had a lot to say, after a fan asked about the income gap as a major source of Occupy's frustration: "One of the things that really concerns me about what the Occupy Movement has revealed to me is this thing about the 99%, which is us, against the government and the banks which are the one percent which have just basically tied up all the power--that we are always, always trying to fit into--I'm very concerned about how many people really feel that they can do anything about all of this. In England we're in the middle of another banking scandal; we've had a couple in the last few months--where it's been revealed that hte major banks in England and around the world have been fixing the interest rates at which they can lend money to each other. It's basically fraud on a massive scale; none of these bankers are going to go to jail, nobody." He pointed out taht if you steal money from the bank, "you'll go to jail really quick," but that the ultra-rich who are stealing millions aren't being penalized. "What power do we think we have? In America, the Republicans and the Democrats have got everything sewn up; it's just power brokering between the two. Last year there was the big battle about the government budget and nobody was moving; the R and D were having a big battle, nobody was moving, the public was suffering, nobody to really champion the public....Can you get together and form some really strong, influential body that will somehow do something about all the lobbying power of the big corporations, and the banks that just control everything?"

He added, "They're not anti-capitalist; they're anti-tyranny."

"I feel like what the Occupy movement does in a lot of ways is it's a moral force," said Crook. "In America we've taken the stance that if it makes money then it's morally acceptable and we need to completely separate those two things."

"I think the TEA Party and the Occupy Movement have a lot of common goals," Crooks added, but he feels that both groups are so concerned with being right that they can't find it in themselves to meet in the middle.

"I very much feel like even though it was a long, drawn-out affair, it was just the beginning," said Ebb.