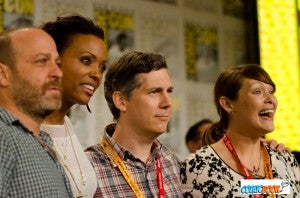 Better late than never when you're entering the danger zone, eh? ComicBook.com photographer Z.D. Roberts was on-hand for FX's Archer panel on Thursday night, and we've (finally) got our recap and some great images to go with it right here.

Wherein Aisha Tyler warns that she'd "Bring a knife" and H. Jon Benjamin say's "I happen to be Jewish.."

I've always wondered just how popular FX's Archer is. My friends watch it but, you know, my friends aren't exactly normal…we use Archer-isms in our normal conversation all the time.

Based on the line that went in loops along the boardwalk outside of the Hilton here in San Diego - I had no reason to doubt. I convinced a very nice security guard on the importance of ComicBook.com to get my way into the room with the panel, skipping the line which I had no chance of getting in the room at all. 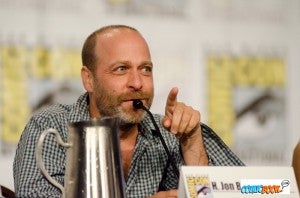 The Q&A was a combination of enlightening and sickening (in a good way).

The cast never stopped cracking each other up with come backs and personal jabs. When asked how they keep their spirits up in the recording studio Chris Parnell answered without a beat "cocaine" - the whole cast concurred.

The question what was their favorite line brought a lot of conversation - nearly all agreeing that Pam had all the best lines - Amber, Pam's voice saying her favorite was "You make me sound like some kind of chupacabra. But for d--ks.” H. Jon Benjamin's was another from Pam "I swear to God, you could drown a toddler in my panties right now."

What may come as no surprise of fans of the show, they occasionally have problems with the censors. Adam Reed told the story of 'Swiss Miss' - where a 16 year old girl continually got after Archer - Adam wanted the girls age to be 14 as that was the age of consent in Switzerland. The FX code person replied that it was "not the age of consent at the Fox Family."

The cast was also asked if their was a live action movie version of Archer - who would they want to play their role. Chris Parnell said no to the chants of the audience yelling YOU! YOU! Chris claimed he was too short to play Cyril. Aisha on the other hand threatened to "cut a b---h" and to "fight anyone who would try to take this role from me." I do believe she was completely serious [note to self, do not cross Aisha Tyler]. H. Jon said John Hamm to the audiences approval and Adam came up with "that guy who created Alf." 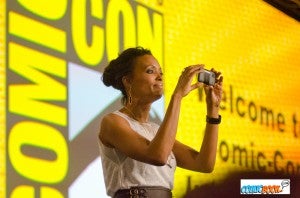 Here's a quick rundown on the spoilers that we were given ------- So again, to warn you SPOILERS BELOW!

-Mallory is going to be married to a man named Ron Cadillac (the seriousness of this was questioned, but I believe it will happen) -Epic Undersea battle will be happening -Andrew Donnely [sp?] will be in charge of the ISIS Armory -There seems to be some consideration of Pam becoming an agent as she's "the most put together person on the show…but…" -Adam: "Lana's a cyborg, there's your spoiler" (I'd go with a joke on this one… but again… it is Archer)

The panel was opened by Archer, who was 'live,' on top of a mountain about to go hand gliding with his pet eagle. Archer welcomed the SDCC crowd by opening with claiming to be giving us an instructional on "How to lose your virginity this weekend." It was not that, as he didn't believe that was ever going to happen.

Archer, in what I'll call special torture proceeded to try to tell us a bunch spoilers for the coming season but his mic 'malfunctioned' due to the wind at the top of the mountain he was on so here are all the notes I took the ellipses are when the mic cut out

Nickolov… superhumans… worked… Barry… space… now a cyborg… still want to bang… Here's a big spoiler I hope you can here me….

And that was it… like I said… 'special torture.'

We were also treated to a special a premiere episode from the new season (on FX in January with 14 episodes).

Coyote Lovely brings Archer, Lana and Cyril to the "sun blasted s--thole" part of south Texas on the hunt for a immigrant smuggling coyote.

In the opening scene Archer is on the top of a look out with a .50 cal rifle that "could kill a building." Lana and Cyril are playing a couple with a broken down car and a 'baby' wrapped in a blanket. Over the walkie talkie's Lana and Archer get into a fight when the truck with they think the smuggler is in.

Sorry, that's all we're going to print now - you'll have to wait until January for the rest. I doubt there's any camera phone recordings of the episode from Comic-Con as there were large scary looking ODIN agents (or maybe just SDCC security guards) scolding people for holding up their phones when the episode was being projected.

Ok, so here's one more thing… Archer gets shot twice in the back.

I have to go, but if I find one dog hair when I come back I'll rub sand into your dead little eyes. I also need you to buy sand. I don't know if they grade it, but ... coarse.