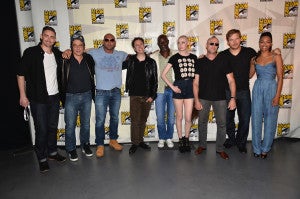 At the start of the weekend, it looked as though San Diego Comic Con International was going to play host to a plethora of new film announcements. We expected The Inhumans, Doctor Strange and Avengers 3 from Marvel; we expected an X-Force announcement, and maybe more, from Fox. And even though Warners blew the lid off of Comic Con by announcing Superman vs. Batman, rumor had them announcing The Flash and Justice League as well.

Coming out of the weekend, though, we got nothing official on X-Force (Rob Liefeld tweets aside), no new movies announced from Marvel, who brought existing films to exhibit and gave us a final title for Avengers 2 that actually means less than it seemed it did at the time.

Superman/Batman was the only Big Two movie that got announced this weekend, and while that sparked a hugely enthusiastic response, a Man of Steel sequel is hardly a surprise. The big treat was really Batman's inclusion.

So while the general consensus was that the panels were awesome, and the clips shown were great, many fans (especially those not cloistered in a room at Comic Con) have expressed that they feel a little let down by the lack of anything resembling a roadmap beyond Superman/Batman, X-Men: Days of Future Past and Ant-Man.

What do you think? Would you rather know the long-term plans the studios have in place to promote your favorite characters or is the idea that they're on the right track at the moment enough for you?

Comic-Con 2013: Are You Disappointed By the Lack of Movie Announcements?