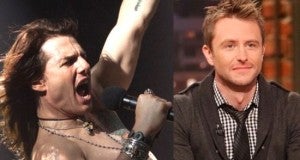 Here's one of those magical moments that can only happen at Comic-Con. Talking Dead's Chris Hardwick was moderator for the Warner Bros. panel at 2013 San Diego Comic-Con International, which included a presentation on Tom Cruise's upcoming science fiction movie Edge Of Tomorrow. During the panel, Tom Cruise surprised Chris Hardwick by revealing that he knew that they both played Stacee Jaxx in different productions of Rock of Ages. With that surprising revelation, a Comic-Con sing-off was unavoidable. Tom Cruise kicked things off by belting out a line from Foreigner's "I Want To Know What Love Is." Chris Hardwick quickly joined in with the next verse of the song. We've embedded the full clip of the memorable moment below, so sit back and enjoy the musical melodies of the host of The Walking Dead after-show and one of the biggest box office stars of all time. The Edge Of Tomorrow is scheduled to be released in movie theaters on June 6, 2014.