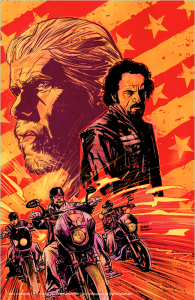 BOOM! Studios formally announced this weekend at San Diego Comic Con International that they will be releasing a comic book series based on FX Network's Sons of Anarchy, from writer Christopher Golden, artist Damian Couceiro and cover artist Garry Brown.

You can check out some preview art at right and below.

“Our team at BOOM! Studios includes some of the biggest fans of Sons of Anarchy and with our long-time desire to create a comic series around the show now a reality, we couldn’t be more excited,” said Ross Richie, CEO of BOOM! Studios. “We are focused on adding to the mythology of the show in a way that is authentic and meaningful, while working closely alongside [series creator Kurt Sutter], FX and Fox so that the fans get the best experience from a Sons of Anarchy comic.” 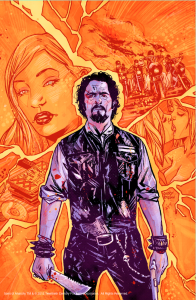 The fan-favorite series is currently in production on its sixth season. Starring Hellboy's Ron Perlman, it's been a favorite at Comic-Con every year, and so it's arguably not surprising that they wanted to make sure to bring out the first art and a talk with creators at the show.

Comic-Con 2013 Follow-Up: Details on the Sons of Anarchy Comic From BOOM!