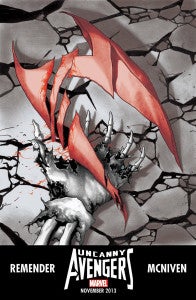 As a new artist comes on board Marvel's flagship title Uncanny Avengers, could a number of those Avengers be about to die? It certainly sounded like it when series writer Rick Remender talked about upcoming events in the comic at Marvel's Infinity panel yesterday afternoon at the San Diego Comic Con International. Teasing his upcoming story "Ragnarok Now," Remender told the audience that "What we've been building to is all coming to a head in the current arc. The Apocalypse Twins have come from the far future after being manipulated by Kang and they have their own agenda. They're basically going to instigate a worldwide mutant rapture and these things are large in scope, they seem impossible but they're actually, probably going to happen. "In the story right now, we've seen a lot of in-fighting among the superhero community in the Marvel Universe going back to Civil War when that fuse was lit and leading up to AvX. The mutants and the humans--the Avengers and the X-Men--have found it very difficult to work together, cohabitate and find commonality to get over their differences and work together as heroes. The consequences of that are what Uncanny Avengers is all about so as we build the story you're going to see more and more of the consequences of these heroes' inabilities to work together as a unit--and it's going to be large in scope, the things that are happening to them." Marvel projected the cover at left, drawn by McNiven and showing what appears to be the shattered headpiece of Scarlet Witch, possibly destroyed by a slash of Wolverine's claws. Scarlet Witch, who precipitated the "No More Mutants" game-changer in House of M, has been the center of many of the least-pleasant interactions between the human and mutant heroes since then. After saying that the "Ragnarok Now" story ties up themes that go all the way back to Civil War, and that they're glad to have McNiven on board as a kind of bookending device, Remender continued: "What's happening...is going to be a culmination of all that we have seen in the Marvel Universe leading up to this point with the Avengers and the X-Men. And while the heroes have been dealing with their own issues and their inability to work together, the villains have been planning things and this is going to be a big story that revolves around the Red Skull, the Apocalypse Twins and Kang--it's going to have a wide scope going through time and space and there's going to be a large body count. The heroes are going to start paying for what they've done in losses of life." Asked whether the cast of Uncanny Avengers will be expanding anytime soon, Remender reiterated to a fan, "The cast will be getting much smaller very soon. Things are not going well for the team and these are the consequences when heroes do not act heroically. things are breaking down. When we get to issue 22, we'll see a shift up and we'll see some new characters coming in but not until then."