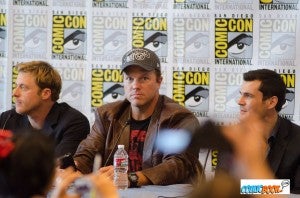 Well, faithful comicbook.com readers, you asked for coverage of Firefly, and you've got it in more ways than one!! You already saw from my coverage of today's panel that the Browncoats were out in full force, showing overwhelming love and respect for the actors and creative backbone of the short-lived television series.  But wait!  There's even MORE coverage of Firefly!!  After the panel I got the fortunate opportunity to take part in a press conference that was designed to promote the Science Channel's planned ten-year anniversary special titled Browncoats Unite.  The special, airing on November 11, 2012, will cap off an all-day marathon of Firefly episodes on the network.  Browncoats Unite will feature exclusive coverage of the Comic-Con panel, along with a special roundtable discussion of the show with several of the cast members, as well as show creator Joss Whedon.  There will also be behind-the-scenes discussion that fans of the show will not want to miss!

“Firefly is a landmark work of science fiction and a favorite with our viewers.  Ever since it premiered on Science, fans have asked us to do something special to mark its 10-year anniversary,” said Debbie Myers, General Manager and Executive Vice President of Science.  “With this signature celebration, punctuated by Browncoats Unite, we will connect the minds behind this classic franchise with its legions of passionate fans.”  With that encourage phrasing, the press conference quickly got underway with a flurry of questions from the gathered reporters, all gathered to hear Nathan Fillion, Summer Glau, Joss Whedon, Adam Baldwin, Alex Tudyk, and Sean

Maher alongside produce Tim Minear.  The first question focused on how being on the show impacted those involved. "It taught me how to act," said Fillion jokingly and half-serious.  "I would come up with ideas all the time for my character and Joss would listen and then say, "ok, but how about this."  He does a good job of guiding you and leading you in directions that help develop your thoughts."

A more probing question asked about the role of women in not only Firefly, but in Joss Whedon's stories as a whole.  Whedon himself responded, "It says that men who are comfortable with powerful women are more powerful men.  It doesn’t matter what it is.  Everyone has that niche.  The great thing about Firefly was that they were all so different and they were all carrying a different power and a different feel.  For Zoe in particular, this debate will always go on because she was a wife and eventually a mother and people think that she was strong because she was being protective in a womanly way, but at the end of the day, Gina Torres was playing a bad ass and that's it."

A question that was met with a lot of interest was if Whedon would ever or had ever considered an RPG or a video game for Firefly.  Whedon had a very passionate reply, " There was a lot of talk about a multiplayer thing and it just disappeared and I’m not sure why.  We had talked to a couple of different companies who were interested in the project an it just disappeared.  I always felt that this show lends itself to gaming.  The immersive kind where there are so many planets, agendas, etc. There's so much you could explore with this universe and the various characters and their backgrounds and relationships in it.  I also think it should still be on the air for those reasons!"

One very direct question discussed why the show was so popular amongst the military and those who work in space exploration.  "Obviously there is a war element and people who suffered greatly beause of it," said Whedon,  "everything is them bonding in the trenches.  There’s a kind of isolation they feel that no matter how dark Mal gets, you know he will lay down his life for his crew. You have the service elements and the command structure, too. It's a   very unironic look at the life of a soldier.  In the space element, there isn’t a lot out there that inspires people to want to build rockets, fly out to space.  There could not be a greater tribute than to have that kind of following for our show."

In discussing the possibility of comic books or other books that might further explore the characters in a deeper fashion, Summer Glau said, "I'm happy with how my character ended.  I got all I wanted from the show and the Serenity movie.  I'm fine with where it is."  Fillion agreed, "I'm content with everything that went in it."  One of the final pieces of discussion was on the cult status of the show, specifically the sayings and pieces of the show that have gone as viral as they have.  "I'm amazed the hat thing went as viral as it did," said Sean Maher, "because it was such a small part of the show."  "The specificity of the hat is perfect for a cult show," Whedon interjected, "If I had been smart I would have done something with the hat.  As a cult show it lends itself well to those touches."