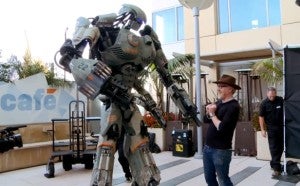 Last night, The Mythbusters had their panel at San Diego Comic Con International; while we weren't able to make it, one of the highlights of the day didn't take place at the panel, but outside of the convention center, where Stan Winston Studios unveiled a look at a 400-pound robot, created in less than a  month for Comic-Con, and Mythbusters star Adam Savage was there--and loving it.

The robot, made by the same folks who helped with Pacific Rim and the Iron Man movies, admitted that there were "many casualties" when asked how many engineers had been beaned by its four arms.

Check out the video below; it's a ton of fun.

Becky Lynch Drops a Huge Hint About a WrestleMania 37 Return

How Not to Summon a Demon Lord Debuts Season 2 Opening: Watch