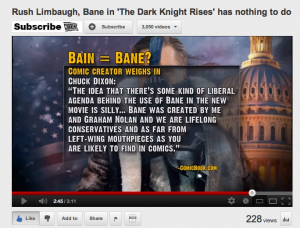 Our brief interview with Chuck Dixon about Bane, Rush Limbaugh and the politics of The Dark Knight Rises has been one of the most unexpectedly hot stories to come out of ComicBook.com in quite some time--and that continued last night, with Dixon's comments being quoted on CurrentTV's The Young Turks, a liberal talk show critical of Limbaugh's comments.

"It must have been the same guys who planted the Obama birth announcement in the Hawaiian newspapers," joked host Cenk Uygur, pointing out that Bane as a Batman villain first appeared in 1993 (and on film in 1997), so that his appearance in The Dark Knight Rises was unlikely to be some kind of semiotic terrorism on the part of the Obama camp.

In addition to The Young Turks (video embedded below), the story has been referenced and linked on The Washington Times, The Daily Beast, Gawker, E! News and more.