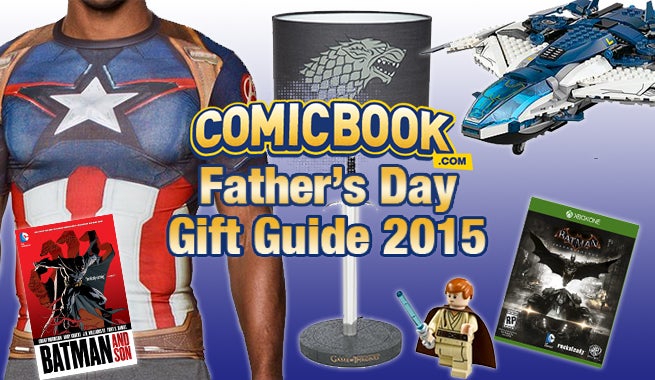 Father's Day is right around the corner! You knew that right? Don't worry, we won't tell dad. Nor will we tell him that the epic gift you found on behalf of ComicBook.com was so last minute!

It's tough to know which gift is the right gift, but you know your dad better than we do - so go ahead and scroll through our list of suggestions for Father's Day 2015 and surely, you'll find a match for pops on his day. As a guy and grown up member of the geek community , I can personally vouch for wanting each item on this list!

For those on a tighter budget, why not snag up one 2015's best movies, Kingsman: The Secret Service, based on Mark Millar's comic run? Yeah, the film has a R-rating tagged on it so it's not something for a the whole family if the kids are young, but dad will appreciate Kingsman. Grab the blu-ray, a couple beers, some popcorn, and kick back with pops on Sunday night with the action thriller packed with good laughs and truly outrageous moments.

You are never ever too old for LEGOs. Seriously, look at what LEGO puts out these days. They're a pop culture phenomena for a reason. With the box office success from Avengers: Age of Ultron, chances are dad's inner nerd not only loved watching the heroes assemble on screen, but would also enjoy assembling his own Quinjet with the Quinjet City Chase set which recreates an iconic scene from Age of Ultron. To top things off, the set comes with a few Avengers minifigures: Black Widow, Vision, Captain America, and the movie's big bad, Ultron. If $80 is a little too steep, the Attack on Avengers Tower ($59.99) set and the new and first ever Ant-Man ($19.99) set are both fantastic options.

So, dad isn't an Avengers fan but LEGO was a good idea, huh? Check out the LEGO Naboo Starfighter set. Clocking in a bit less than the Quinjet set and aimed at the Star Wars fans (who isn't a Star Wars fan?), the Naboo Starfighter contains 442 pieces and builds into a movie-accurate model of the ship which is ready to be flown by the included Naboo pilot minifigure. Plus, dad will also open up Anakin Skywalker, Obi Wan Kenobi, and R2 D2 figure minifigures. If you really want to go big on Star Wars LEGOs for dad, you should check out the 1685 piece Tie Fighter which stands over a foot and a half tall and deserves it's own trophy case.

Okay, so LEGOs were a good idea, but you want something that dad will be able to engage with for a longer time before having to start over? Or maybe you want to give it a go yourself? Well, Jurassic World has been a huge hit at the box office with the largest opening weekend in history for a reason, so we're assuming you've already seen the epic dino showdown. Now, give dad a chance to play a more light hearted fun adventure than it's movie counterpart with LEGO Jurassic World on PS3, Xbox 360, PS4, or Xbox One!

Dad still devastated by last week's Game of Thrones finale? Cheer him up Sunday with a memorial of his favorite fallen character. This Longclaw Desk Lamp might not be made of Valyrian steel or Dragon Glass, but it will always serve as a reminder for pops that Jon Snow took down a white walker in hand to hand combat. It's a great prop for any Thrones fan to have and will protect your house during the long Winter.

Dressing like a super hero is a great motivation to hit the gym or get a jog going! Not to mention, several of Under Armour's Alter Ego shirts and pants are just awesome for wearing in general. Most available in both compression shirts or, if dad doesn't like wearing anything too tight, as a standard Under Armour tee.

Remind dad just how lucky he is to have you. Grant Morrison's Batman And Son introduces Batman to Damian via Talia Al Ghul, Batman's once lover. The daughter of Ras claims Damian is Bruce's child, however, young Damian has his own agenda even after Bruce welcomes him. The Dark Knight and those near him find themselves being targeted by the genetically supreme, very angry young boy.

The Walking Dead is one of the hottest topics in pop culture right now and attracts 16 million viewers of all ages to it's episodes on AMC. Gifting the season(s) on blu-ray for catch up or rewatching is a great idea, but why not go one further? The Walking Dead is based on an Image comics run over 10 years deep with rich material and even more brutal plot lines than on television. Help dad discover the source material from which The Walking Dead tv series was birthed with either volumes of the comic or compendiums.

While all of these items have links to get them online, if you're really in a pinch, most are available at Best Buy, Wal Mart, Dick's Sporting Goods, or a Lego Store right now! Let us know what dad thinks of his gift!