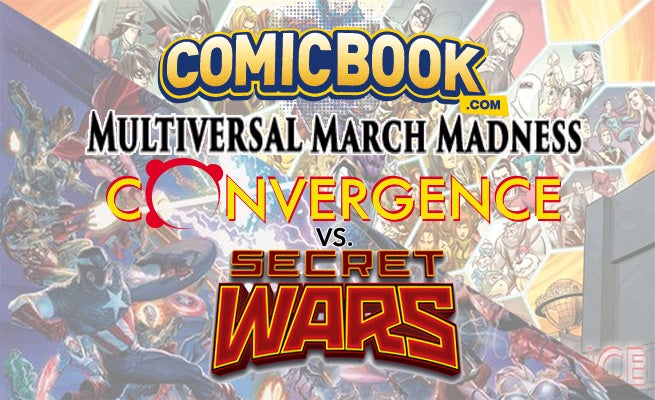 It's time to obssess over a new bracket. No, not a re-do for the NCAA's College Basketball March Madness, but for ComicBook.com's Multiversal March Madness.  With tournament fever and The Big Two's multiverse-spanning crossovers on the horizon, we're taking DC and Marvel Comics' best parallel worlds from Convergence and Secret Wars and throwing them in an arena that dwarfs both Battleworld and The Dome--Namely, yours.

As the tournament unfolds, ComicBook.com will publish different match-ups There, we'll list each combatant's stats, strengths, and weaknesses. After you're all read-up, you'll can determine who advances to the next round via a poll. No pressure or anything. Every match-up is listed below. For the first round, we'll post two battles a day, where you'll have 24 hours to vote the lesser world off to wherever it is that dead universes go (we certainly don't want to find out).

And just to raise the stakes, we'll be giving away a surprise prize to a winning bracket holder. The rules are simple: Just fill your bracket (above) and post it in the comments section. When the winner is determined in April, we'll pull the winning brackets and put them in a raffle. Whoever wins the raffle wins the prize.

Pre-Crisis Earth 2 (JSA, Infinity Inc.) Vs. Superboy and the Legion of Super-Heroes--Vote Now!

The Monarchy of M (House of M) Vs. Westchester (X-Men: The Animated Series)--Vote Now!

Have fun, and may the best (or most popular) universe win.