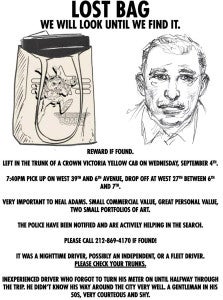 Neal Adams, the artist best known for reinventing Batman and Green Lantern in the 1970s and drawing the award-winning Green Lantern/Green Arrow run written by longtime DC editor Dennis O'Neil, has lost a portfolio of original art in New York City--and he wants everyone to know it.

Adams is hoping that New Yorkers assist him in locating a bag of art portfolios he left in the trunk of a yellow cab almost a month ago; he's had no luck with official channels in New York, and so has taken his appeal to the press--both inside and outside of the comics industry.

“Oh my God, I put that thing in the car like I never do and sure enough they’re gone,” Neal Adams told CBS 2 on Friday. “I can tell you I’ve kept hold of it very well for a long time, but by golly.”

Adams has also put his prodigious art talent to use by sketching the taxi driver in question, whom he said seemed inexperienced and not familiar with the city but who was courteous and a little shy.

“The lack of certain details presents a challenge,” said Taxi and Limousine Commission spokesman Allan Fromberg, who self-identifies in The New York Post as a longtime fan of Adams. “But we’re going to do everything in our power to reunite Mr. Adams with his portfolios.”

The portfolios, contained in a Bucky O'Hare canvas bag, are reportedly short on commercial value and long on personal/sentimental value to Adams. Adams's family-run studio is offering a reward for the return of the sketches--which range over thirty years of Adams's career--which the person returning can take in  cash or trade for original art.