As New York Comic Con draws near and they launch a series of signings and on-site exclusive art cards, digital comics retailer ComiXology has already made a pair of pre-convention announcements sure to draw some attention. Yesterday, they joined the bookstore market in carrying digital copies of DC Comics's graphic novels and collected editions, bringing a more cost-effective and easier-to-navigate way of reading to ComiXology. This expansion in distribution brings bestselling DC Comics and Vertigo titles, including Watchmen, V for Vendetta, Sandman, Y the Last Man and an assortment of DC Comics – The New 52 collections, among many others, to comiXology's top digital comics platform. They've been previously available on Barnes & Noble's Nook, Amazon's Kindle and on iBooks. "DC Entertainment has some of the greatest graphic novels and collected editions ever made," said comiXology co-founder and CEO David Steinberger. "I can't wait for our customers to enjoy these amazing books in Guided View on our platform." This morning, they announced the addition of Avatar Press to their line. 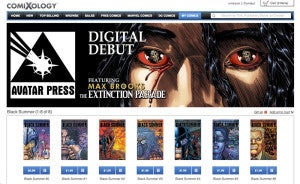 The Avatar Press titles available today across comiXology's entire platform include Max Brooks' Extinction Parade, Jonathan Hickman's God Is Dead, Kieron Gillen's Uber, and multiple titles from Warren Ellis including Black Summer, No Hero and Supergod. In Avatar's case, over 20 titles are available web-only that are "too extreme for mobile" including Garth Ennis' notorious Crossed and Crossed: Badlands,  Alan Moore's recently banned Neonomicon, and David Lapham's Ferals. This is likely a response to the difficulty that sexually-explicit books have getting access to the Android and iTunes markets; recently, Image Comics titles like Sex and Saga have been withheld from mobile apps on a case-by-case basis. "It's well known that publisher William Christensen – with his singular vision – developed Avatar Press as a place for great creators to tell no-holds-barred stories to a devoted base of fans," said comiXology co-founder and CEO David Steinberger. "We're excited to bring William's unique publishing vision to the world through comiXology's entire platform, and deliver Avatar's more challenging content to a global audience of fans through comiXology.com." "It's great to join forces with comiXology to bring Avatar's editorial to an entirely new customer base – whether it's those fans that haven't been able to find our titles in print or those who simply haven't been exposed to Avatar's uncensored catalog," said Avatar Press Publisher William Christensen. "We look forward to developing a relationship with the digital consumer who will now be able to discover, read, and enjoy Avatar Press titles in comiXology's ground breaking Guided View."