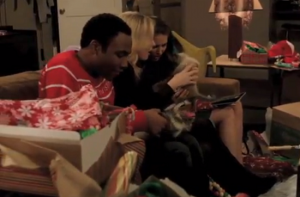 Will Community's season four premiere be a Christmas-themed episode, in spite of the fact that the network pushed the show's premiere date from October back to February? It certainly looks like it, on the basis of a 30-second clip released by NBC yesterday. Community star Joel McHale introduces the clip with holiday greetings from the cast of Community, and then it cuts to a holiday party where the gang (along with Ken Jeong's Chang and Jim Rash's Dean Pelton) are exchanging gifts...kind of. Notably absent from the scene here is Chevy Chase, who recently came to an agreement with Sony to leave the show; while he won't finish out the season, filming was already repeatedly finished on all but one episode when he left. Community will return to the air on October 19--which is, inconveniently enough, placed at February 7 on your calendars--at 8 p.m.