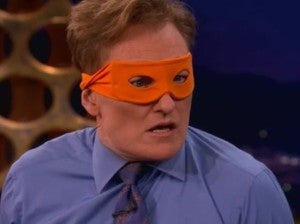 During the training, Steven Ho and Conan O'Brien took turns hitting each other with leather paddles. When it was time for Conan to transform into a superhero, Steven Ho said, "Because of your pumpkinish complexion and hair, I thought that the most fitting superhero for you to be would be Michelangelo of the Ninja Turtles."

The Teenage Mutant Ninja Turtles reboot is scheduled to premiere in movie theaters on June 6, 2014.

Conan O'Brien Becomes A Ninja Turtle Thanks To Steven Ho