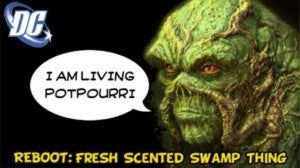 In the wake of DC's announcement earlier today that Golden Age Green Lantern Alan Scott would be reintroduced as a homosexual in the world of the New 52, late night host Conan O'Brien has proposed a list of half a dozen reboots for other DC characters.

"Here are 6 classic characters who will suddenly undergo a subtle, yet profound, change," says Team Coco in a blog post--but they must be working from an old list, because each of the graphics they chose feature the DC logo as it might have appeared on the cover of the #1 issues last year, not as it appears now.

Rebooted characters on the Team Coco list include a Canadian Superman, a version of Wonder Woman who tweets inappropriately, "Libertarian Batman" and more.

Apparently the Canadian joke wasn't passed by any comic book fans, who would remember that Booster Gold was supposed to be Canadian in the New 52, but it never happened. When I mentioned the change on Twitter earlier today, Dan Jurgens--who created Booster Gold and currently writes the character in Justice League International--says that since it never happened in-story, it's not true.