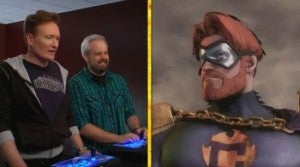 In a segment on Wednesday's CONAN called Clueless Gamer, Conan O'Brien offered up his own review of Injustice: Gods Among Us. When Aaron Bleyaert tells Conan that there is a prequel comic book for the game, Conan proclaims, "So let me get this straight, you have to read a comic book before you play the video game. We've entered a new level of nerd." When Aaron suggests that Conan pick Aquaman as his character, Conan laughs, "Even fish are embarrassed when they see Aquaman." Aaron also reveals the exclusive premiere of General Zod, who won't be available for download until July. After playing a couple different characters, Conan finally picks a character he co-created called the Flaming C. Conan makes Aaron select Aquaman and also wear a blindfold to fight the Flaming C, but Aquaman still wins. Conan gives the game a B+.