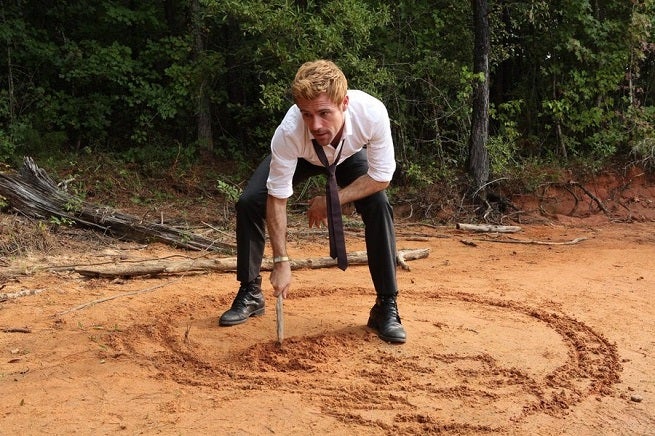 The episode opens on an old truck which pulls up outside of a church. A man gets out, opens the back hatch and removes an old wooden box with some kind of spiritual message scrawled on a piece of paper taped to the top (it's old and faded).

The man brings the box into the church and sets it on the desk, placing his hand over a cross-shaped series of holes in the top. A woman -- his sister, it turns out -- enters the room carrying a box of files and asks what's in the box. He says it's a rattlesnake, and she says that he should be careful -- that the rattlesnakes haven't been milked for venom yet -- and that he should use some copperheads they have elsewhere in the church. The man dismisses her, saying his father used poisonous ones, and so will he. When she objecs on safety grounds, he tells her that his father would be disappointed if he knew how the church's numbers have dwindled.

Later, he's preaching -- not well. When he realizes that he's losing the audience, he brings out the snake and starts handling it during the sermon, getting the enthusiasm of the crowd up. Eventually, though, he's bitten and passes out. He seemingly dies, but then rises again, with a glowing, orange object that looks like a shard of something in his hand. He pockets the item and rises, suddenly a more competent and confident speaker. A one-legged man on crutches comes up to see him, and the preacher touches him on the chest, healing him.

Zed is in an art class, where they're drawing a nude, male model. She looks down to her feet and sees snakes wrapped around her ankles, screams, and the class takes a break. The model -- Eddie -- asks Zed to get coffee and she tries to excuse herself. He persists, asking her to dinner, and she reluctantly accepts.

She heads the mill house to tell John about her vision, but he's in a bad mood and they start talking over each other. When he hears "snakes," though, he realizes that her vision is likely connected to the preacher in Kentucky.

They make their way to the church where Preacher Zachary is now a celebrity, with a crowded building full of people waiting to be healed. Constantine realizes that he's speaking Enochian, the language of the angels, and that nobody can wield that kind of power withotu consequences.

At a doctor's office, the man whose leg had been regenerated is being examined when he starts to complain about the heat. The doctor says they're almost done and continues to make small talk through the examination. Eventually the man's irises redden and he blows the doctor across the room, then vanishes, reappearing behind the doctor and killing him.

After the sermon, Constantine and Zed are standing in a receiving line, talking to a congregant whose arthritis was healed. When Zed gets to Preacher Zachary, his touch makes her see visions of what seems to be angels and other heavenly sights. Constantine won't touch him, instead asking him where he learned the Enochian. Zachary simply says, "Who are we to question the gifts we receive from the Lord?"

The possessed man whose leg had been healed is walking down a street in boxers and a t-shirt, moving like an ape. A police officer pulls over, but then can't see him when he exits the patrol car. He gets out to examine further and the man jumps him and kills him.

At a fellowship lunch after the service, Constantine and Zed are talking about the situation; she says the preacher's heart is in the right place, but Constantine says that he's getting his magic from someplace dark and it will likely take a toll on the land. He takes her to a body of water out behind the woods, where dozens of fish have died and are floating on the surface. Constantine tries and fails to summon Manny, with Zed surprised to learn that he actually knows an angel. She wants to meet him.

Zachary heads into the church, where he sees his sister from before cleaning the altar. He says that they need to build a bigger church. He tells her (Sarah) that God is using him as a tool, but she's not so confident the source of the power is necessarily good. She's sick.

On the bed of the water, Constantine draws a circle around himself and uses dried myrtle to help him summon Manny. John tells him the situation, and Manny says Constantine can only understand the language if he faces the sun. He vanishes, with Zed reappearing (he had momentarily taken her place) and Constantine has her hum a tune that they had heard earlier in the church while he faces the sun. The tune echoes back, and the pair start pursuing it to the edge of the woods, where they find an angel -- a pale woman with wings, more traditional depiction than we usually see here -- seemingly injured on the ground. They take her to a barn and set her up with a blanket. She says her name is Imogen and that she was taking Zachary to Heaven when somehow he plucked one of her feathers, causing her to fall to Earth and him to return from the dead.

Manny shows up and asks Imogen if she's okay. She says she doesn't know. Manny didn't know she had fallen. Manny says she'll die if she stays here, and that no mortal has managed to remove a feather before. Constantine decides to get it back.

Constantine casts a protection spell around the barn, laying down a hose that will present running water that will be the barrier around her. Zed is upset that Constantine is so cynical in spite of knowing angels. Constantine says that religion is fine, but that belief isn't enough; you have to actively fight evil.

The police come to question Zachary and Sarah about Nate, the man who killed the doctor and the cop. Sarah takes the questions and then goes inside, where Zachary says it must be a mistake, that Nate would never hurt anyone. She says that Zachary's healing powers are dangerous to play with, and accuses him of glorifying himself rather than God. She starts to cough, and he wants her to let him heal it but she won't. She says he's been different lately, and he says he just felt their father's death more deeply than she did. When she disagrees, he orders her to leave.

He tells him that they need to return the feather to prevent the death of the angel and other consequences, but when he reaches out to take it, he's thrown across the room. Zachary is convinced Constantine is evil, and kicks him out.

Zed, dozing in the tent, wakes to a noise. She sees the shadow of a person walking past and closes her eyes again, only to be dragged out by a growling and snorting Nate. Constantine rescues her and, when the man goes after him, stabs Nate in self-defense. As the man dies, Constantine sees the red vanish from his eyes. Back at the barn, he tells everyone that it's a "ghoul," something born of magic gone wrong. Imogen says more will turn. Constantine says he doesn't know what to do since the preacher has the power of the feather on his side.

The next day, Zed goes to church again, renouncing John to Zachary and asking to be baptized. During her baptism, she takes the feather from a chain around Zachary's neck. He stumbles backwards into the water, asking her why. She says she had to. The people around them who had previously been healed start turning dark and attacking the rest of the crowd, so Constantine tells everyone to run.

Constantine, Zachary and Zed take refuge in the church from the horde outside, and Constantine sends Zed out the back to return the feather to Imogen. In the barn, Imogen says she's in pain, and Manny asks her what it's like. She explains it in rather desperate terms. He asks her what it was like the first time the sun hit her skin.

Back in the church, Zachary won't help Constantine, blaming himself for what happened and thinking that this is the punishment for his sins. He admitted that he killed a man in a DWI before his father's death. Constantine realizes the because he had a mortal sin on his soul when he was dying, he wasn't being taken to Heaven but to hell.

Back in the barn, Manny is talking to Imogen about how flawed humans are and that the angels could do better with Earth. She says she wants the world back just for them.

Constantine realizes that they can't let Imogen get the feather. Those who were healed make their way in and start attacking John and Zachary, but are restored to normal as Manny and Zed restore the wing.

She's a fallen angel, though, with her color scheme changing to black as she gets her feather back. She can't make it out of the barn thanks to Constantine's protective spell, and he shows up to challenge her.

She takes Zed hostage, saying that she was cast out for killing a mortal. Constantine tells Manny that he's the only one who can help, and Manny says he can't, that it's against the rules. He vanishes briefly, then reappears in Zed's body, ripping out Imogen's heart.

Back at the church, the infirm have been restored to their infirmities, and everyone is looking sad and broken. Zachary tells them that while he's felt the hands of both God and the devil recently, it's free will that's even more powerful. As he opens his hymnal to lead the congregation, his sister smiles.

Back at the mill house, Manny and Constantine are wondering how Imogen managed her trick. Manny says the barrier between Hell and Earth is getting thinner as a result of the Rising Darkness. He says he'll face consequences for his actions, but that what Imogen did shouldn't have been possible.

Constantine says that whatever comes out of hell next, they'll be waiting for it.

Later, in the bath, Zed gets a phone call; she's forgotten her date with the model, who is waiting for her. They'll have to reschedule. When Eddie hangs up, though, there's a man in the car behind him -- large, and wearing a twisted cross on a chain -- who says they'll see her soon.

Constantine Recap With Spoilers: Blessed Are the Damned