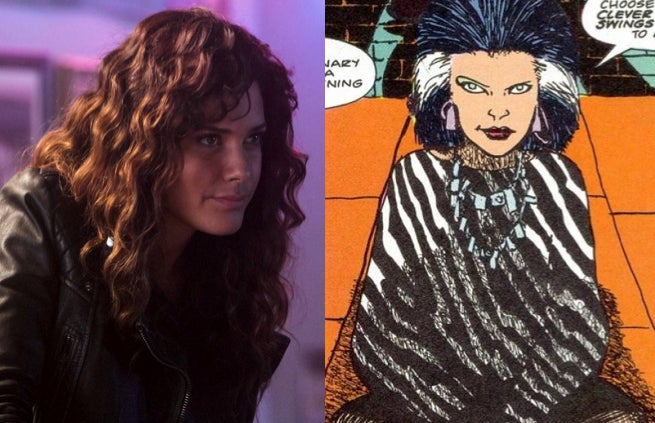 Tonight's episode of Constantine, "What Lies Beneath," features the debut of character Zed Martin. Zed, who is reportedly replacing David Goyer's original character Liv as Constantine's main female compatriot, seems poised to have a significant presence throughout the show's first season.

In the episode's preview, Zed appears to have visions of the supernatural world that she communicates through illustration. Indeed, viewers saw a glimpse of her drawing John's face in the pilot episode, despite never meeting him. Other clips suggest that some of her drawings can come to life—which is pretty unfortunate, considering her interest in drafting demons and creatures.

Beyond just being a complicated illustrator, Zed holds a pretty significant flame in Constantine's comic history. A creation of original "Hellblazer" scribe Jamie Delano, she debuted in "Hellblazer #4" in 1988. In the comics, she actually went by Mary Martin and had white streaks in her hair, Martin meets Constantine in a London back alley before inviting him to his apartment, where Constantine see illustrations of himself despite never meeting her.

After Martin assists John in rescuing his young nice from the self-explanatory Damnation Army, the two begin a romantic relationship. As a magician and psychic, Martin was able to provide mystical assistance to Constantine's capers throughout her 31-issue tenure. Her time came to an end, however, during the "Resurrection Crusade" story arc.

Targeted by cult called the Resurrection Crusade, led by Martin's father, Martin is abducted for a sacrificial ceremony. Believing Mary to be the bearer of the next messiah, the cult prepares Martin to receive their savior. The ritual is botched, however, when the summoned spirit rejects Martin. It turns out, a prior evening spent with John removed her stock as a pure virgin. Not fit for the spirit, Martin dies in the ritual.

Though Mary, or Zed's, presence was cut short in "Hellblazer's" 300-issue run, she was the first lasting romance in John's long line of lovers. Tonight's episode should reveal where Constantine plans on taking the character, and whether or not Zed will follow Mary's comic book path.

Constantine: Who Is Zed Martin?