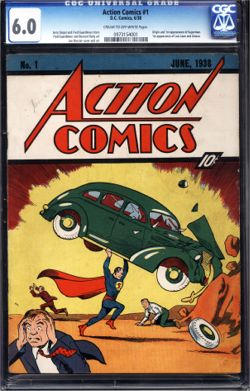 A copy of the ultra rare Action Comics #1 will be available for auction on Friday. The issue, which marks the first ever appearance of Superman, is in fine condition with a CGC grade of 6.0 and has an estimated value of $126,000. Only 100 copies of Action Comics #1 are known to exist.

Identity of the owner of the comic has not yet been made public. The issue was bought second hand in 1950 for the whopping price tag of 35 cents.

The auction for the issue will start February 27th at mid-night and will last for two weeks. Starting bid for the issue begins at $1.00 and is expected to fetch a sum even greater than the book's estimated value.

Stephen Fishler and Vincent Zurzolo, co-owners of ComicConnect Corp. based in New York, will hold the auction. The two also run the website Comicconnect.com, an on-line auction house devoted to the selling of vintage comic books. Fans will also have a chance on Friday to bid on other early issues of Action Comics.

Copy Of Action Comics #1 To Be Auctioned