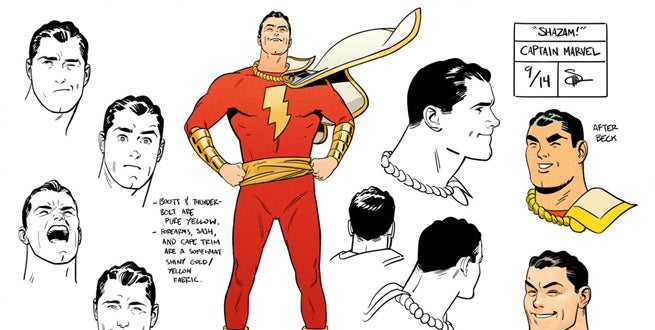 When Evan "Doc" Shaner started drawing Captain Marvel (DC Comics type) on his tumblr, fans took to it immediately. He started getting requests at conventions, his art was featured on comic news sites and blogs, and it was just praise after praise. Turns out, this is a viable way to get work on a character, as now the artist teams up with Jeff Parker for a look at the classic version of the Big Red Cheese in Convergence: SHAZAM!

We talked with both writer and artist about what it's like to work on the story together, how they match-up against the seemingly massively out-matched Gotham by Gaslight characters, and just what it is that makes this version of Captain Marvel (and his counterpart Billy Batson) so dang cool. 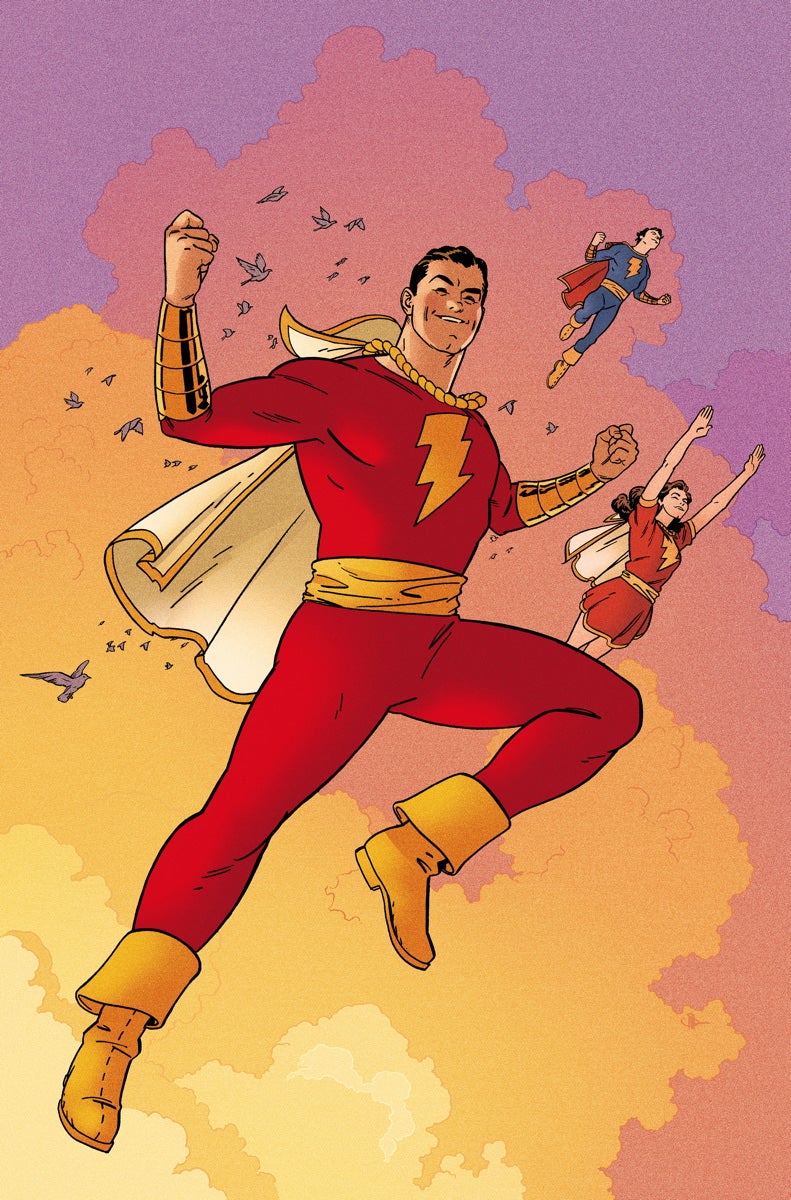 Jeff, let's start with an important question. Is it possible for you to type "SHAZAM!" without a) it being in all caps, and b) you shouting it in your head (or out loud)? I haven't ever been able to.

Jeff Parker: Definitely not. There's only one way to say it, at the top of your lungs. Because you're demanding to be struck with a lightning bolt.

Doc, people have been wanting you to do a Captain Marvel comic since your Tumblr antics, especially that six panel interpretation of Nate Cosby's simplified Captain Marvel. What's it like to have fans rally around you like that ahead of an assignment like this?

Evan "Doc" Shaner: Amazing. A lot of those folks have been so kind to me the last couple of years regarding all the Captain Marvel drawings and it means a lot to me. People would say something about me drawing Captain Marvel professionally and I always appreciated it but I'd long since given up on the idea of actually working on the character. Certainly this version of him, at least. When the book was announced the reaction online was pretty overwhelming. 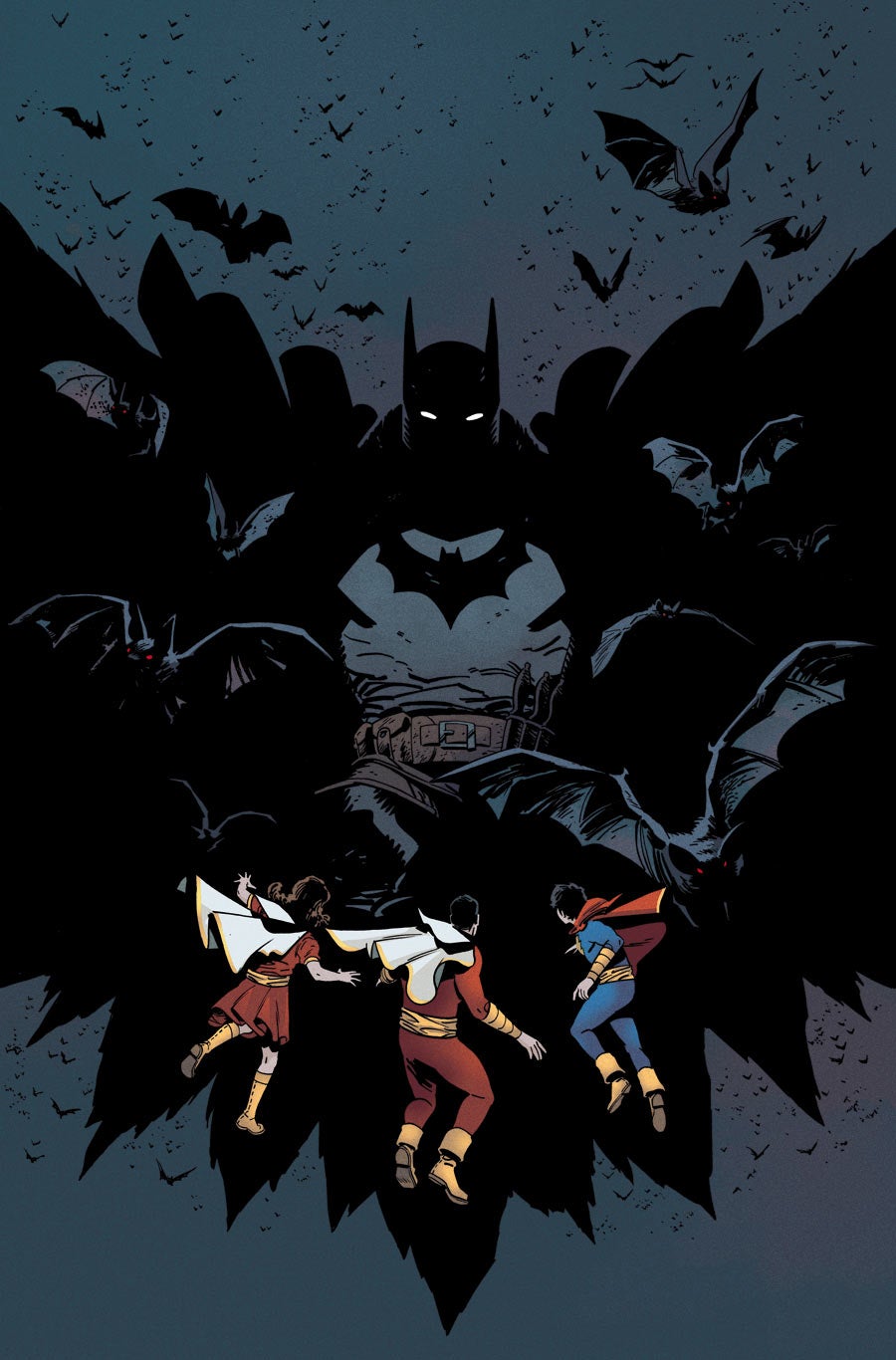 For both of you, what is it that makes Captain Marvel (or SHAZAM if you're a bit more modern) unique and special amongst the many power houses of the DC Universe?

Parker: He's the purest adolescent fantasy, a kid becoming a powerful super-hero, but always returning to being a kid- because that's an important state of being you shouldn't just abandon. He also has the most amazing supporting cast of any hero- yes we have a talking tiger in the story.

Shaner: Yeah, Jeff nailed it. I also think he's got some of the most memorable visuals in all of comics, as well as one of the best origins. All of that, and a talking tiger too.

Here you're specifically getting to take on the Crisis-era version of the Marvel family. What's the appeal of pulling characters out of a specific era like this?

Parker: They were maybe the closest version to the original Fawcett characters, which I love.

Shaner: When the job came up I had no idea which iteration of these characters I was going to get to draw, all I knew was that the title was "SHAZAM!" So believe me when I say I would have happily drawn these guys no matter what era they were pulled from. That said, the version we have in this book is the one I'm most fond of.

The other half of this equation is also a fan-favorite, the Gotham by Gaslight world of characters. Now, call me crazy, but it seems like some steampunk heroes are a little outmatched by people using the wisdom of Solomon, the strength of Hercules, the stamina of Atlas, the power of Zeus, the courage of Achilles and the Speed of Mercury. What even makes this a fight?

Parker: You're right, but things take a turn that even up the Gotham side considerably- and Batman, even in that world, is still no pushover. He's been getting ready for anything.

What do you hope to reveal about these characters in a short, two-issue tie-in story like this? What do you want the readers to come away from this knowing that they didn't know before?

Parker: I hope the pure zeal of adventure and optimism come through in the face of the most dire circumstance. I don't have to hope though, Evan makes sure of it. Even facing the end of their world, the Marvel Family remain true to who they are, and it's glorious.

Any particular moment or interaction you especially enjoyed that you're looking forward to fans getting to see that you can tease?

Shaner: I don't want to give away who exactly shows up, but there's a stretch in the first issue where we're getting moment after moment that made me as a fan particularly happy. Not even as the guy who gets to draw it, but as the guy who loves these characters, it was really pretty exciting. We get to spend more time with Billy than I had originally expected, and I'm glad that we do because he's every bit as important as Cap.