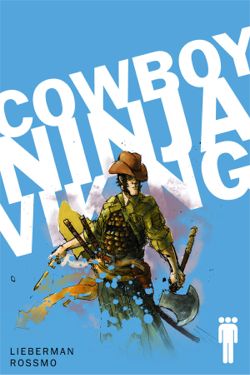 No, we're not talking about three different comic books. Images Comics and Shadowline have announced a title based on a hero that they are appropriately billing as being for "the schizophrenic in us all." The new series is called Cowboy Ninja Viking. The writer on the series is AJ Lieberman, who was also writer of Batman: Hush Returns, and the artist on the series is Proof artist Riley Rossmo. "Cowboy Ninja Viking is everything I look for in a series to bring to Image," said Jim Valentino, who is Vice-President of Image Comics. "There is absolutely nothing else on the stands that looks or reads remotely like Cowboy Ninja Viking, especially given its Golden Age dimensions and format. I certainly can't think of any other titles featuring schizophrenic heroes combating evil with no less than three personalities." The title character of Cowboy Ninja Viking is the birth child of Doctor Sebastian Ghislain, a psychotherapist who recruits Multiple Personality Disorder patients to create a unit of counter-intelligence agents called the Triplets. Unfortunately, some of these agents become out of control assassins, and Cowboy Ninja Viking, is called in to take down his own brethren. Cowboy Ninja Viking #1 will be a 24-page full color Golden Age-format comic book and is scheduled to arrive in comic book stores October 7, 2009.