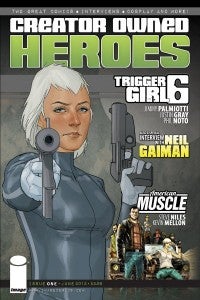 On the same day that DC released the first Before Watchmen comic, a project plagued by the fury of fans and Watchmen's original creator over creator ownership and creators' rights, regular DC contributors Jimmy Palmiotti and Justin Gray (All-Star Western, The Ray) dropped the first issue of their new book, Creator-Owned Heroes. It's a fascinating read, that is to comic books what a feature-packed, director's cut "Blu-Ray combo pack" is to the movies. A pair of beautifully-rendered stories written by top-shelf talent are backed up by not only interviews with the creators of those stories, but other supplemental material including an interview with comics legend Neil Gaiman. It's huge value for fans who are used to page counts shrinking more and more and "extra features" on even the most artistically-praised Big Two books being reduced to a couple of pages of sketches that showed up on the Web three months before. The format changes may seem minor, but the end result is a comic book which might cost $3.99, but which probably takes as long to read as the rest of your pile of mainstream, 20-page superhero books combined this week. There's also a feature on a cosplayer dressed as one of the characters, and convention photos, both of which have the effect of making the book feel intimate and connected to the fans in a way that letter columns used to (and still do, where they exist--basically in The Walking Dead and Savage Dragon, as far as I can tell). The end result is a book that plays to the comics-reading public very effectively--we know that we're part of a small, close community and not only do we want to support our favorite creators, but we want to feel like our part of the community has value. Palmiotti and Gray are clearly communicating here that it does--that their work is an integral part of a community of which we're all a part. 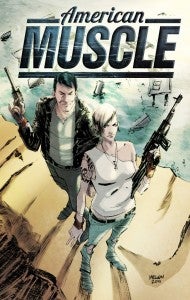 Oh, yeah--and the actual comics contained in this volume are terrific, too. All of those extra features, of course, would mean nothing if they weren't, because who cares about the making of a crappy comic? But even just looking at the names on the cover, it's easy to see that such a thing would be unlikely verging on impossible. Steve Niles (an icon of the creators' rights movement and the creator of 30 Days of Night) and Phil Noto (Infinite Horizon) join Palmiotti and Gray to craft a book that's as jam-packed with understated star power as it is likely to sell and extra few thousand just because Gaiman's name is on the front. American Muscle, the Niles-written action story, has pitch-perfect, kinetic art from Kevin Mellon and, in spite of being the first chapter in a six-part story still manages to cram a lot of information into what's probably the best car action I've seen in comics. That's a staple of action films, of course, but it's not something that comics have put a lot of energy into doing well, and seeing it work here is the kind of thing that seems likely to inspire a handful of young artists to try and take it to the next level instead of just resting on their laurels when publishers say it won't work. That's something we could use more of across the board in comics, be it action scenes or minority leads or, well, creator ownership. The characters are compelling and engaging, which says something for a story that starts from scratch without established names, features half a dozen characters and wraps up in 12 pages. Maybe if more comics functioned like this, the community wouldn't feel so insular. There's also a last-page reveal that changes the game completely and will likely make the story a little more mainstream-comics-friendly come next issue, so look for that. 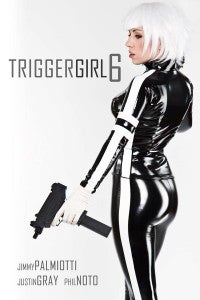 Trigger Girl 6 is the centerpiece of the book, though, and rightly so. As much as I enjoyed American Muscle, I loved Palmiotti, Gray and Noto's piece, which perfectly balanced action, character, intrigue and violence in a beautifully rendered (if NSFW) short that introduces an awesome new female lead who manages to do what so often seems impossible in comics: to be both strong and sexy without deteriorating into cheesecake, and to pull off a skintight leather outfit without a D cup. In fact, it's interesting to note that Noto drew hardly any characters who looked the way non-readers expect a character to look when you say "comic book character." The sexuality in Trigger Girl 6 is inescapable but tasteful, and neither she nor any of the men in the book have the typical one-size-fits-all body type that plagues so many comics. The artwork was so creative and beautiful that it nearly distracted from the inspired storytelling. If you're reading this review and haven't stopped at some point in the middle to go buy this book, I'm not sure what's wrong with you. If it's not the best book that comes out this month (which would surprise me), there's no way it isn't the best buy. Either one of the two stories contained in here would be a justifiable purchase on its own at $2.99, and the Gaiman interview and other features are at least as good as the stuff appearing in Bleeding Cool magazine's (admittedly good) first issue, on the stands this week as well. Do some talented creators--and yourself--a favor and get your hands on Creator-Owned Heroes.