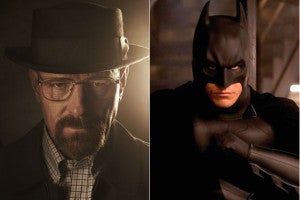 In addition to rumors and speculation that set up Breaking Bad star Bryan Cranston as Lex Luthor in the upcoming Man of Steel sequel, the actor has some real, tangible connections to DC Comics. He was a villain on The Flash TV series the first time around, after all. And he voiced Jim Gordon in the Batman: Year One animated movie that came out a while back. But did you ever think of Walter White--Heisenberg himself, not Cranston the actor--as Batman? Lost and Prometheus writer Damon Lindelof has given it quite a bit of thought, and it's the centerpiece of an article he wrote over at Vulture about the end of Breaking Bad. He says the two iconic characters have more in common than one would think on first blush, and that they key is--you guessed it!--chemistry. Here's an excerpt; you can find the full entry at the link above.

The conventional thinking is that Bruce Wayne became Batman on the day that his parents were murdered. This is his origin story. We all know it.  We all accept it. We all love it. Because it makes sense. Your parents are gunned down in front of you, so of course you vow an unending vendetta against crime and then dress up like a winged mammal to exact it.

Except that's not how Bruce Wayne became Batman. Bruce Wayne was already Batman. Because millions upon millions of people are murdered by criminals all the time — especially in comic books. But the sons and daughters of those people do not become Batman. But Bruce Wayne? Bruce was different. There was something inside him. Lying dormant. He just needed something powerful enough to awaken it.

In chemical terms, this is called a catalyst. In the very first episode of this masterful show, Walter White is told he has advanced, inoperable, most likely fatal lung cancer. And in that moment, time slows down. Sound drops out. It is intense and it is effective and the reason we are starting here is because this is the start. The origin. The moment Walt begins his journey. The moment he becomes Heisenberg. We know all this because Walt tells us so. The ticking time bomb that is the cancer becomes his rationale for everything that comes next; the lying, the lawbreaking, the child-poisoning. But then the cancer goes away. This is the equivalent of Bruce Wayne's parents suddenly reappearing to him and saying, "We had to fake our deaths when you were a kid and we've been in witness protection all this time, and we're so sorry, but the guy who shot us was actually an FBI agent helping us and he wasn't even a criminal and we love you, so can we have our pearls back and NOW YOU DON'T HAVE TO BE BATMAN ANYMORE!!!" But would Bruce stop being Batman? No. He would not. Because he is Batman. And once the catalyst has … well, catalyzed? There is no going back.

And this is how I know the same is true with Walter White.

Of course, that's been proven right as it pertains to Batman a few times; The Dark Knight Returns is the most notable example, when he was retired and came back. That's a pattern they revisited with some tweaks in Christopher Nolan's The Dark Knight Rises. In both of those cases, Batman returned, and then got some semblance of a happy ending when he appeared to die and used the opportunity that gave him to build a legacy that would outlive any man. Could Heisenberg do the same? That certainly seems to be his goal...