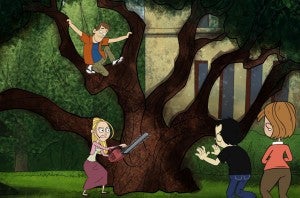 The Hub has provided ComicBook.com with this exclusive look at "Dan Vs. Anger Management," the season premiere of their  animated comedy Dan Vs. which will air on Saturday at 4 p.m.

In the episode, the dangerously-unstable Dan is forced to take a course in anger management to control his destructive instincts, and finds a kindred spirit in the mild- mannered, but incredibly unstable class instructor (guest star Jenna Fischer, The Office).

The image at right was described on the Dan Vs. Facebook page as Fischer's reaction to the cancellation of The Office, which I find almost as amusing as Dan's observation that "cute girls with PhD's have all the problems."

Does anyone else wonder how Chris ended up in anger management? There's a story there.

Dan Vs. stars Curtis Armstrong, Dave Foley and Paget Brewster. A Q&A will be forthcoming with Brewster tomorrow; it had originally been slated to run today, but we wanted to give fans a chance to check out the clip first.

Dan Vs.: An Exclusive Look at Saturday's Season Premiere