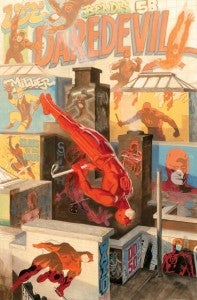 This April, Marvel celebrates fifty years of the Man Without Fear in Mark Waid and Javier Rodriguez's Daredevil #1.50. It will be the second #1-branded Daredevil comic in as many months; in March, Waid and regular series artist Chris Samnee will relaunch Daredevil with a new #1 as part of the publisher's All-New Marvel NOW initiative. "At editor Steve Wacker's suggestion, we're celebrating the Man Without Fear's 50th anniversary not by looking back--but by looking forward," said Waid. "With a special story set in the future, on Matt Murdock's 50th birthday, peppered with clues for sharp-eyed readers as to what the rest of 2014 will hold for Daredevil!" The publisher promises that Daredevil #1.50 will also feature a number of brand-new backup stories, "courtesy of Horn Head's most iconic creators!" Just who? Well, that's still classified information. Frank Miller recently contribute to Batman's seventy-fifth anniversary, so probably don't take him completely off the table for at least a variant cover, even though he had to delay his Xerxes graphic novel due to deadline problems caused by his Hollywood commitments. With the relaunch, a digital comics series in the offing and a Netflix original series set to go into production, don't expect this to be the last big release from Daredevil in his fiftieth birthday year. You can check out the solicitation text below. What will tomorrow bring for Matt Murdock, and how will this year's events play into his unexpected future? Can a man truly stay fearless forever? The answers—and even more surprises--will hit sooner than you'd expect! Hang on tight, because the future for Matt Murdock is now in DAREDEVIL #1.50! DAREDEVIL #1.50 Written by MARK WAID Art by JAVIER RODRIGUEZ Cover by PAOLO RIVERA Variant Covers by MARCOS MARTIN & CHRIS SAMNEE ON-SALE THIS APRIL!