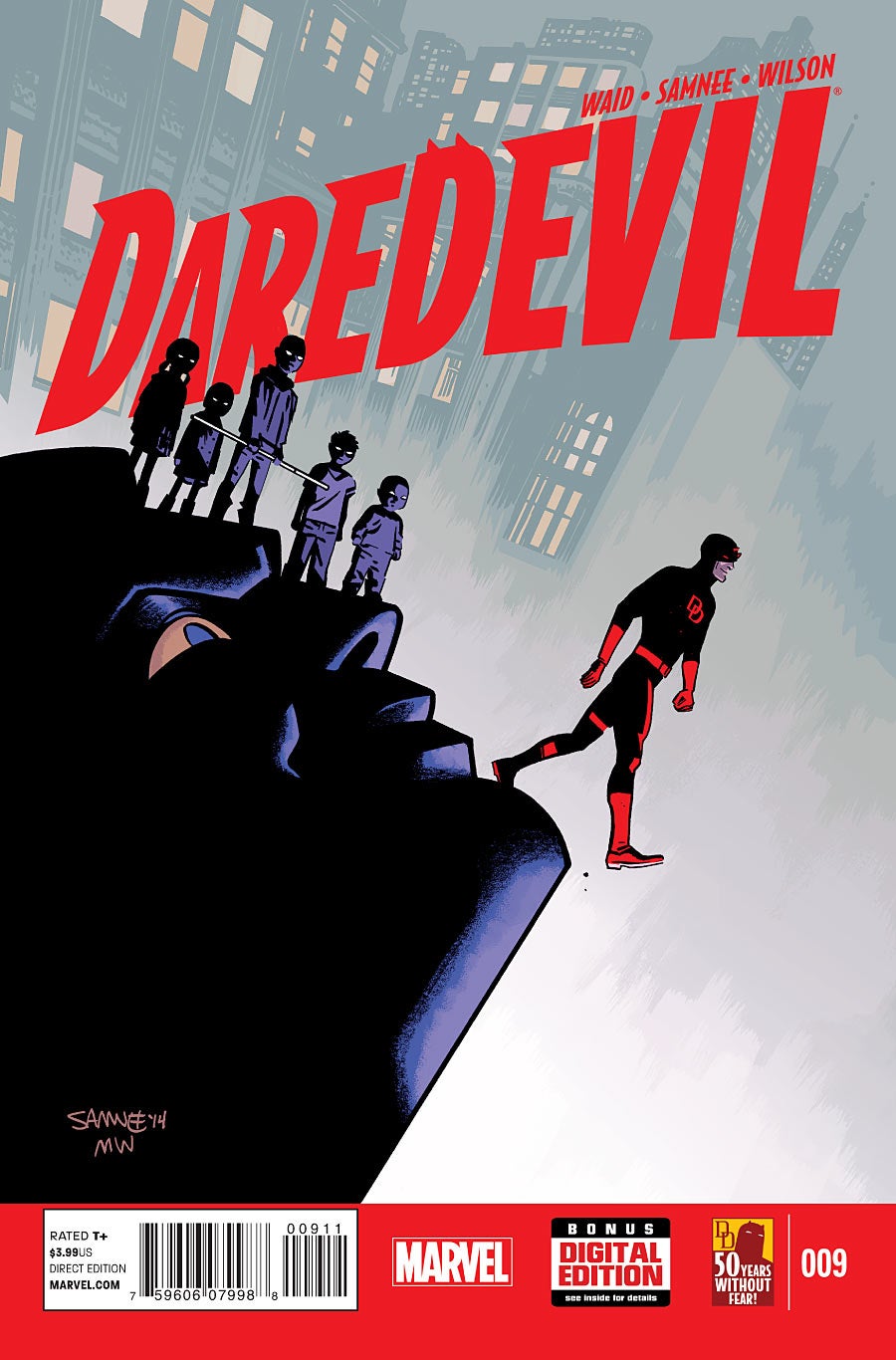 Daredevil #9 is the second part of a story that was started in Daredevil #8. The previous issue was a terrifying tale that reintroduced the Purple Man and created a new menace in the form of his children. All of his children are the result of rape, committed through the use of mind control abilities. As a result they have been raised in less than ideal circumstances. In the best cases they were raised without a father, in the worst they were abandoned to social services. When given the immense power of their father, to twist the minds of anyone to give them what they want and do what they would like, their traumas immediately come to the surface.

That premise is terrifying and Daredevil #8 created a palpable mood of terror. It was an issue that stuck in my thoughts, as it revealed monsters both very real (in the form of child abuse) and impossible (in the form of collective mind control). Here the story moves beyond the horrific and begins to weave its structure into something more cohesive. The separate stories of Daredevil and the Purple Man's children merge together along with the larger themes of Waid and Samnee's Daredevil.

The current run on Daredevil has focused on the concept of recovery: handling past traumas and moving past them. The character of Daredevil has proven to be a perfect one to address these themes. Throughout the many acclaimed runs of the series he has been put through incredible trauma, even within the context of the Marvel universe. Matt Murdock has lost parents, lovers, a wife, and many, many friends. He has been unmasked and disbarred as a lawyer, forcing him away from his chosen professions and his home, Hell's Kitchen. Daredevil's career has been an ongoing tale of suffering and loss. He is now addressing that accumulated trauma, working to recover and create a new life. The concept of trauma is key to understanding the events of Daredevil #9, as well as the entire current volume of the series.

Matt's past has been brought to the forefront of the series through an offer to write an autobiography. He has been given an eight million dollar advance to write the story of his life. It's a deal that sounds too good to be true and is. Matt is forced to confront what it really means to write about his life by his loved ones. Kirsten and Foggy, his girlfriend and best friend, point out that besides not being a good writer, that self-reflection is something that will bring Matt into conflict with the pain he is trying to move past. The idea of writing an autobiography is compared to wallowing in misery, failing to create a new life by choosing to live in the past.

Rather than run through the myriad traumas and deaths that have defined Daredevil's story so far, Samnee constructs a pair of panels that serve to remind or inform readers of the issues to which Kirsten and Foggy refer. There's a striking splash page that resembles the cover of a novel, like the imagined façade of Matt's autobiography. It shows Daredevil surrounded by bodies beneath the forms of his enemies. Samnee presents the concept of autobiography as a regressive nightmare. 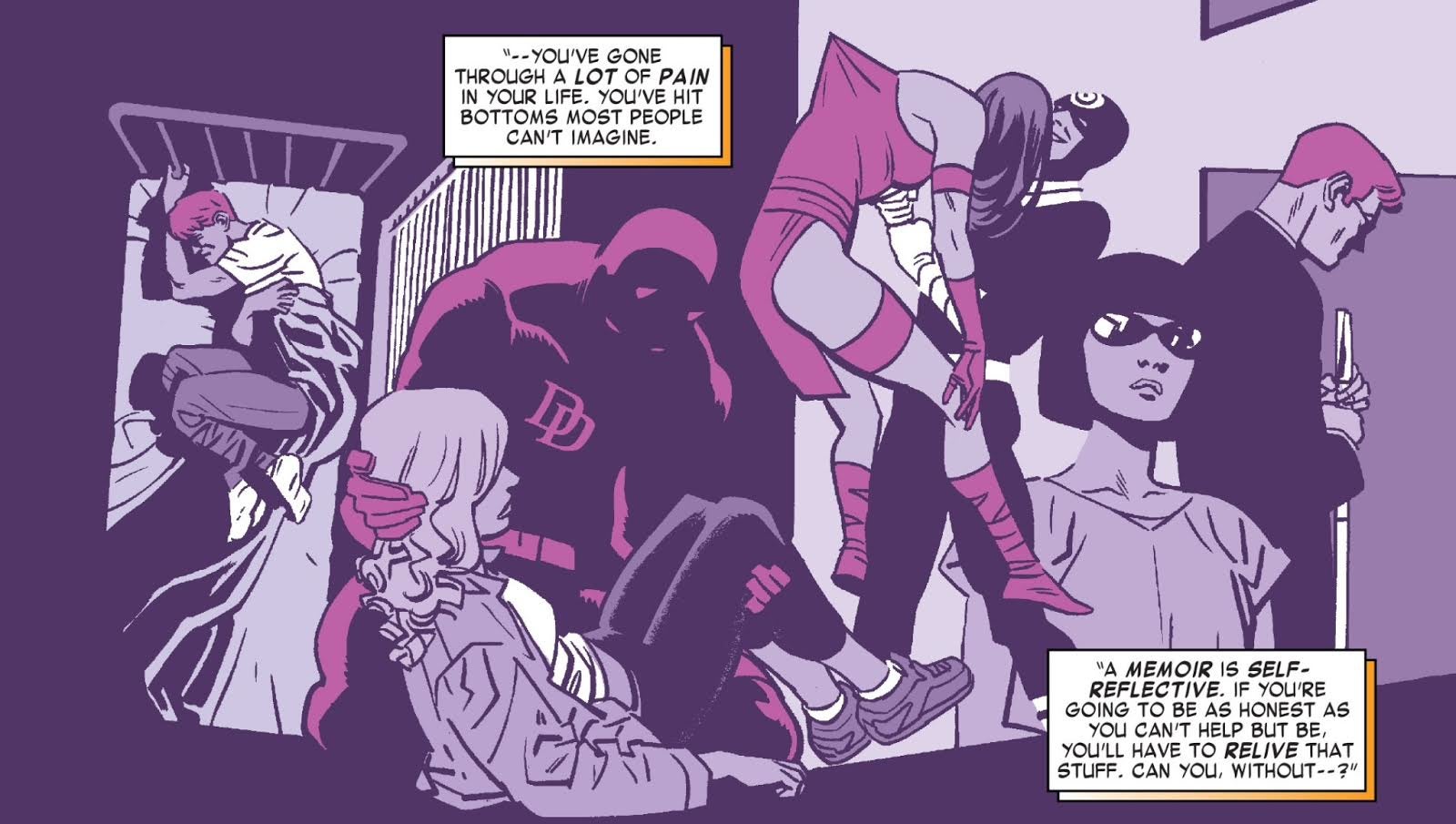 A second reflective panel is even more striking. As Matt considers his life, he moves between a series of particularly painful memories, shown in a long horizontal panel. The succession of moments come in chronological order, a greatest hits of pain. Samnee composes each moment to come with the greatest possible impact. The loss of Matt's father is shown with a towering overhead shot of him as a child in bed, expressing the smallness he feels in that moment. The loss of his ex-wife Milla Donovan is shown with a literal distance between them. Although she is still alive, Matt is incapable of reaching her. The entire panel is cast in a monochromatic color scheme of various shades of purple. Matt Wilson creates a connection between trauma and the color purple here that informs the rest of the story when Daredevil comes into conflict with the children of the Purple Man. 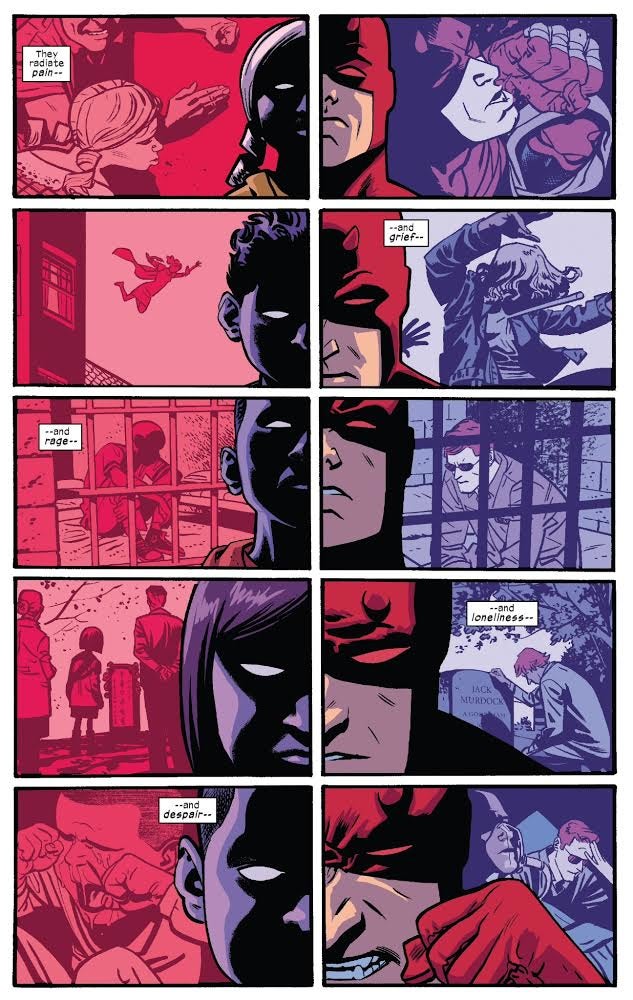 The Purple Man's children are used to reflect the scars of the past. In a beautiful composition at the end of the issue, Samnee shows them in conflict with Daredevil and creates a series of connections between their own traumas and those of the hero. Concepts like grief, loneliness, and despair are constructed with snapshots of their lives. Samnee builds a story for these five young people in five panels, and then relates each of their experiences to those of Daredevil in five more. This page manages to accomplish a great deal, presenting the defining trauma of each character with a carefully selected image and word.

Wilson's colors blend the two narratives of traumatized children and an adult who learned to cope with trauma. Reds and purples are inverted between the left and right columns, connecting past narratives with present faces. The children are not shown to be villains, but young people who are still intimately close to their sources of pain and unable to handle it. They have the same scars as a hero, but lack the time and wisdom to cope.

Metaphor is a key tool in the superhero genre. From its very beginning, the superhero has been used to express mundane ideas through big, operatic characters and conflicts. Waid and Samnee have crafted their run on Daredevil into a metaphor about pain and recovery, specifically childhood trauma. They are telling stories about coping mechanisms. Those mechanisms may be expressed through the use of super villains and lucrative career moves in the Bay area, but the story and ideas are honest.

It's easy to be cynical about superhero comics, and that cynicism is often not wrongly felt. Yet in the case of Waid and Samnee's Daredevil, nothing could be further from the truth. In every page and story beat, it is clear that this comic is being written with a completely genuine interest in the characters and the ideas they express. This is a story about dealing with pain and building a better future, and it is told with complete honesty. It's a big, bold metaphor for something many of us can relate to on a deeply personal level. Although it's fun, it's also incredibly human. Waid, Samnee, and Wilson are giving their all to this story and Daredevil #9 is an example of superhero comics at their absolute best.

Daredevil #9 is Superhero Comics at Their Best (REVIEW)