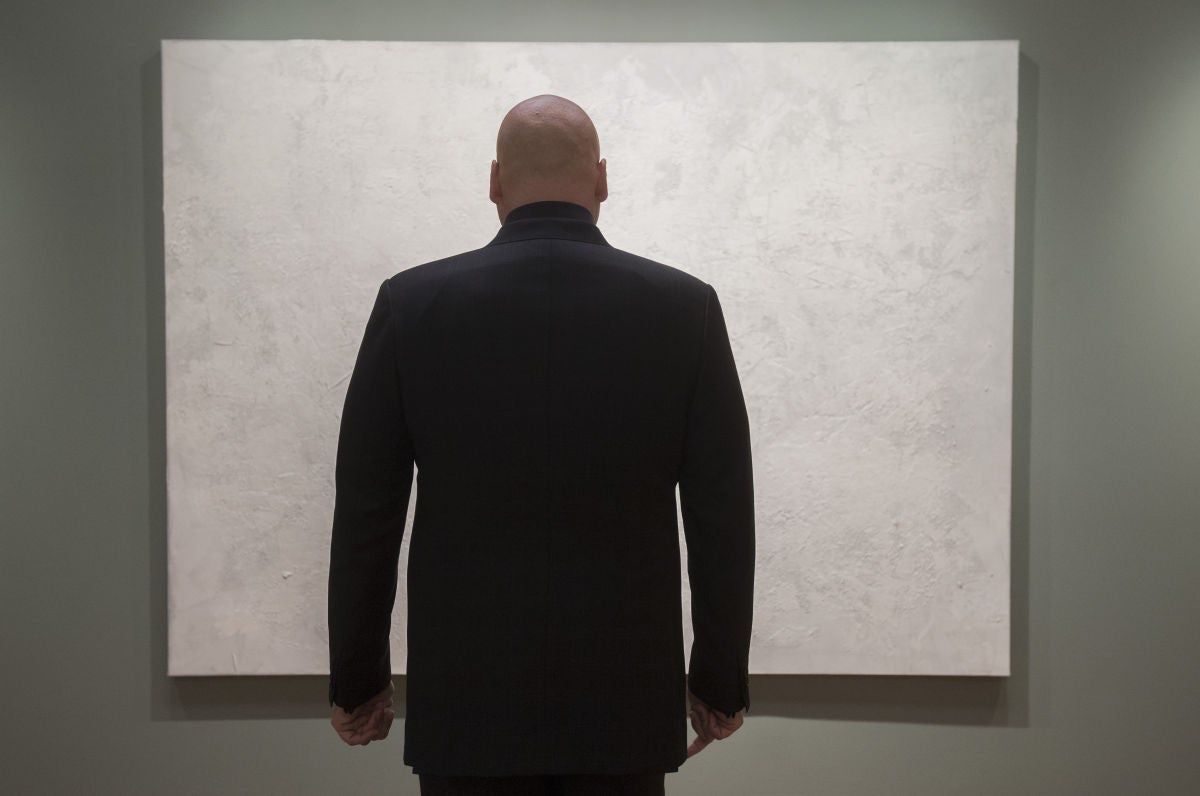 "Rabbit In A Snowstorm" opens in a bowling ally, where a man named Prohaska bowls a private game. Another man, named Heely, asks to join, but Prohaska denies him. Heely then savagely beats and kills Prohaska with a bowling ball. He’s a highly trained assassin of some sort, but an enigma for now. The show quickly cuts to the past, where Heely purchases guns from an arms dealer named Turk.

In the present, the Heely hides his gun in a nearby pinball machine after killing Prohaska, and waits for the police. When they arrive, he surrenders and asks for a lawyer.

The next day, Matt Murdock meets with a priest outside of a church. The priest recognizes Matt as Jack Murdock’s son, and says that Matt can confess anything to him and not be in legal trouble. The priest asks Matt if he wants to share a coffee, but Matt rejects the offer.

Across town at a Brooklyn waterfront, journalist Ben Urich meets a mobster. The mob boss, who’s tied to Union Allied, says he’s retiring to Flordia, citing the recent number of hits on his colleagues He doesn't know who is wiping out New York’s existing crime families, but thinks it’s a new player who doesn’t follow the rules. He encourages Urich to not follow the story.

Across town, Matt, Foggy, and Karen meet at the law office for a new day at work. They receive a knock on the door. Wesley, the Kingpin’s right hand man, is there, seeking Nelson and Murdock’s legal assistance. He explains that he came to Nelson and Murdock—instead of a much larger firm— because his mysterious employer wants lawyers with roots in Hell’s Kitchen. Wesley is there because he wants Nelson and Murdock to represent Heely, whom his company is paying all legal fees to defend in court.

Foggy is eager at the chance, but Matt isn’t entirely sold at the prospect. He doesn’t trust Wesley and his spotty story. Wesley then makes a personal jab at Karen and her murder case, even though the murder was never public knowledge. Wesley claims he has friends on the police force, so that’s how he knew. Wesley then tells Matt and Foggy that they have 38 minutes to get to police precinct 13, where Heely and the cops there will corroborate his claims.

Instead, Matt follows Wesley, who gets into an SUV with Wilson Fisk. Now Matt really doesn’t trust Wesley. Foggy goes to the precinct, where he meets Heely. Heels claims self-defense, but says that he has “issues.” Despite Foggy’s hesitance, Matt agrees to take Heely’s case.

At Urich’s office, Urich is visited by his editor. Urich tells his editor that he’s working on a story about a new power player in the New York crime scene. The editor is unconvinced by the story, and says it won’t sell papers. Urich says that he’s sick of writing puff pieces that just sell, citing a better time when reporters actually wrote the news. Angry, Urich pursues his crime story in private.

Back at the police station, Matt and Foggy continue talking to Heely. Matt wants to know why Heely is connected to the company Wesley represents, but Heely doesn’t give an answer. Matt pressures Heely, but Foggy asks to speak in private. Foggy doesn’t want to defend Heely, feeling uneasy. Matt disagrees, and then tells Heely that they’l defend him in a private hearing, but Heely wants a public trial with a jury.

At the bowling alley, Wesley enters and recovers the gun hiding under the pinball machine.

Matt and Foggy return to Nelson and Murdock’s office, where they go over Heely’s case. They discuss their legal strategy, and have Karen look into Confederated Global, the company that’s paying them to defend Heely.

Across town, Karen Page debates signing a document saying she’ll no longer discuss the embezzlement documents she uncovered from Union Allied. Union Allied says that they’ll give Karen a large sum for keeping her mouth shut, but she doesn't know if she wants to.

At a hospital, Urich talks to a nurse about his wife’s ailing health. Without much money, the hospital will push Urich’s wife to an outpatient facility that won’t properly care for her. He begs the nurse to extend his wife’s stay. She buys Urich’s wife five more days, but then the situation will be out of her hands unless Urich can scrounge the money. Urich then goes to visit his wife in her hospital room, where she is sleeping.

At Nelson and Murdock, Foggy and Matt work on Heely’s case. Karen then shows up, but they have no clue that Karen met with Confederated Global. Later in during Heely’s trial, Foggy defends Heely before a jury. Matt hears the familiar heartbeat of Wesley, who has just entered the courtroom, which then triggers the panicked hearbeat of a jury member.

That night, that panicked jury member meets a man in an alley. The man tells her to follow his instructions and vote in Heely’s defense. When the woman leaves, Daredevil attacks the man. The man says he’s blackmailing the woman to vote in Heely’s defense. He doesn’t know who his employer is, though. But, he tells Matt where to find his employer. Daredevil makes the man have the blackmailed jury member excused.

The next day in court, the jury member is excused and replaced. Matt then makes the defense’s closing argument before the judge, but he hears a panicked heartbeat from another jury member, who was probably also blackmailed. Matt then finished his statement, a speech on morality versus facts. He tells the jury that Heely must be acquitted in a court of law.

Across town, a Confederated Global executive meets with Wesley. He wants to meet with tWilson Fisk, but Fisk won’t meet with him. The executive then reveals that he’s connected with Heely.

Karen Page goes to meet Fisher’s widowed wife, and apologizes for getting him involved and killed. Karen then tells the wife that Union Allied wants her sign the deal to stay quiet. The wife tells her to let it go, but Karen says that something doesn’t feel right with Union Allied’s numbers. But, the wife admits that she already signed a silence deal with Union Allied, for her children’s safety, and leaves.

With nowhere else to turn, Karen goes to Ben Urich’s office, and says that she has more information on Union Allied and its connection to the criminal uprising.

Back at Heely’s trial, the jury is split. With a hung jury, the trial is over. Heely is released, but is promptly ambushed by Daredevil later that night. Daredevil and Heely fight, both skilled combatants. With a knife at Heely’s throat, Daredevil demands to know Wesley works for. Heely gives a name: Wilson Fisk. Heely then panics, knowing that by giving up Fisk’s name, Fisk will kill him and his family. Heely then commits suicide by stabbing himself in the head, thinking it a better fate than whatever Fisk might have planned for him.

Elsewhere in Hell’s Kitchen, high up at a luxurious art gallery, Wilson Fisk stares at a white painting. It’s insanely expensive, but he still buys it. When the curator, an attractive woman, asks Fisk how the painting makes him feel, Fisk says it makes him feel “alone.”