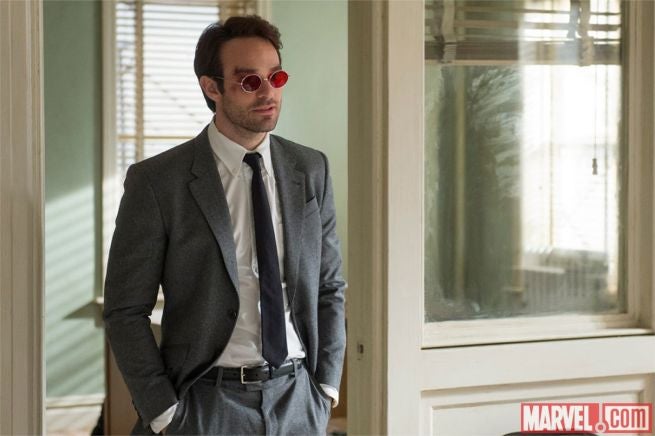 The release date for Marvel and Netflix’s Daredevil series may have been revealed, via the PlayStation 3 version of the Netflix app.

We already knew that Daredevil would be released in May 2015. Now we have a more specific date. Twitter user Marvel_Spider (via CBM) noticed the PS3 Netflix app has the release date for Daredevil listed as May 1, 2015.

Looked up Daredevil on Netflix via my PS3, and it has the release date listed as May 1st, 2015.

This date may stand out in your mind, if you’re a Marvel fan, because it’s also the release date for Avengers: Age of Ultron. Depending on how you look at it, this may be evidence that the date is inaccurate. It does seem strange that Marvel Studios would release two of their big projects on the same date, where Avengers seems likely to overshadow Daredevil. It is possible, as well, that the May 1 date is just a placeholder on the Netflix app, since there hasn’t been an official announcement.

On the other hand, when will audiences be more aware of the Marvel cinematic universe than on the release date for Avengers? Perhaps Marvel is releasing the two together to help drive interest in the Netflix series. This could prove especially true if the Age of Ultron stinger is somehow related to Daredevil.

Again, none of this has been made official, so we’ll have to wait and see if May 1 is the actually release date for Daredevil, or just a hiccup in Netflix’s system.