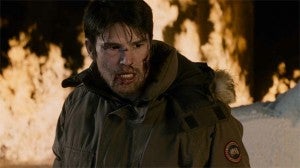 Director David Slade, who sparked some conversation a couple of days ago by seeming to imply on Twitter that Josh Hartnett may be his choice to play Daredevil in an upcoming reset of the franchise he's been tapped to direct, has gone back online to quash rumors about the film, suggesting that neither Hartnett nor anybody else is being considered for the role at present.

"Josh Hartnet is not being discussed or anyone else for DD," Slade tweeted. "That was just some wishful thinking, we are not at casting stage."

Of course, that doesn't necessarily mean that Slade is singling Hartnett out for exclusion. He tweeted again later, "I had the pleasure of working with Josh on 30 Days [of Night]. An excellent and under rated actor and a wonderful human being."

While he was at it, he told his Twitter followers that it was unlikely the movie would be made in 3D. "I am firmly against shooting in stereo so its unlikely to happen that way. Fox is rightly against 2D to 3D conversions."

Daredevil Won't be in 3D, Probably Won't Have Hartnett