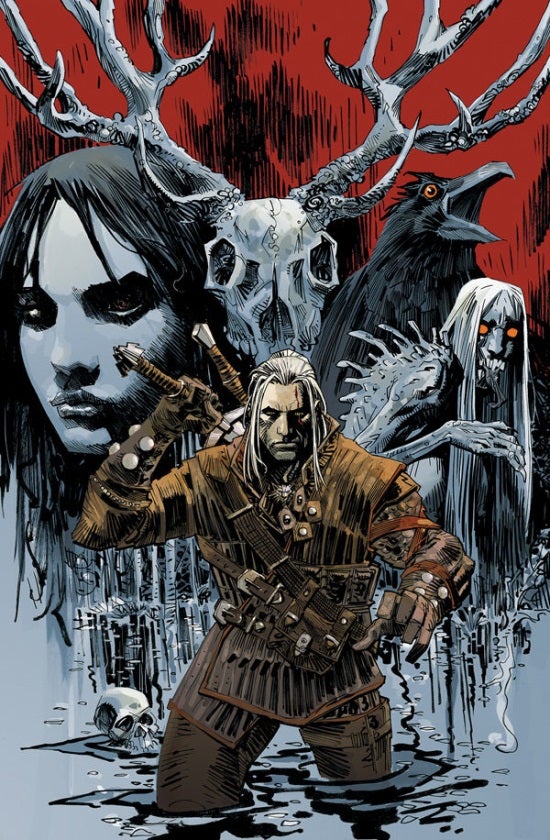 Dark Horse Comics is bringing the dark fantasy world of the Witcher to comics this March. The 5-issue miniseries will be written by Paul Tobin with art by Joe Querio. The story will follow the franchise's main protagonist, Geralt, as he tries to find his way through a maze-like haunted house called the House of Glass. Speaking to CBR, Tobin said that the story would very focused on Geralt's character:

"We wanted a simple intro to the character, so we decided to focus entirely on Geralt. In our story he befriends who he at first believes is a simple hunter: a mountain man of sorts, but soon finds out that the man, Jakob, has a dead wife -- one who is still around, having been transformed into a bruxa, a vampire of sorts. Trying to escape this haunting, and needing a new life, Jakob accompanies Geralt on his travels, but they almost immediately become trapped in a strange house: the House of Glass. Other monsters abound, as well as clues to what is really happening. Between cemetery hags, leshen, a succubus, and a few other surprises, Geralt really has his hands full. That said, "The Witcher" stories, to me, are far more about character, so it's the nature of the people and monsters that Geralt is encountering that are the real story."

The Witcher #1 will be released into comic shops on March 19, 2014. Fans of the Witcher will also be looking forward to the next installment of CD Projekt's video game series based on the same source material, The Witcher 3: Wild Hunt, which is scheduled to be released later in 2014.

Dark Horse Is Bringing The Witcher To Comics

Kevin Smith Has Ideas for Future Masters of the Universe: Revelation Episodes