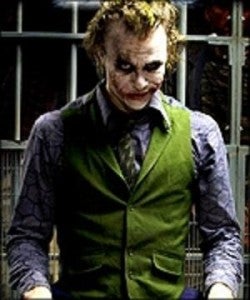 While Heath Ledger's performance as The Joker may have garnered him a posthumous Oscar for Best Supporting Actor at this years Academy Awards ceremony, that did little to assuage fans who were irate that the film The Dark Knight didn't get nominated for Best Picture. It appears that the Academy is addressing those concerns head on, releasing news this week that they will expand the field of Best Picture nominees from five to ten. In discussing the decision, Academy President Sidney Ganis specifically said, "I would not be telling you the truth if I said the words ‘Dark Knight’ did not come up." He went on to clarify further the rationale behind the decision. "Having 10 Best Picture nominees is going to allow Academy voters to recognize and include some of the fantastic movies that often show up in the other Oscar categories but have been squeezed out of the race for the top prize. I can’t wait to see what that list of 10 looks like when the nominees are announced in February.” What does this mean for future comic book movies? Which films will deserve to be included in the Best Picture race in future years? With several big projects lined up over the coming years, particularly from Marvel with Thor and Iron Man 2, and DC Comics with The Green Lantern anything could be possible!