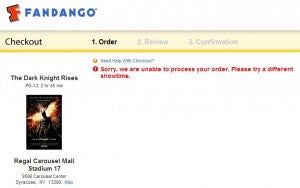 Midnight screenings of The Dark Knight Rises, Christopher Nolan's third and final Batman film, are already selling out around the country, spurring scalpers on eBay and Craigslist to sell them for several times face falue, according to MTV.

MTV was alerted to the phenomenon by a report at ScreenCrush that reported scalped tickets being marked up "as much as 80%," but by the time MTV turned the story around today it was closer to an 800% markup in some online auctions.

While smaller towns and suburbs aren't completely sold out yet, it appears as though most cities--even some that aren't particularly large--are selling out of tickets for the earliest screenings of The Dark Knight Rises, a full month before the movie is set to hit theaters on July 20.

A cursory search of the Syracuse, NY (a nearby city of respectable size) area revealed that tickets were still available in some of the small towns surrounding Syracuse but that the main theater at the mall in the center of town was sold completely out already. Larger cities have with more screens (but also more fans) have also been experiencing the same phenomenon, leading to ticket prices as high as $300 for AMC's Dark Knight Marathon, a full night of screenings that includes all of the Christopher Nolan Bat-films.

MTV notes that some fans may feel (if they can afford it) that the inflated ticket prices are worth their while given the immediate and difficult-to-avoid nature of spoilers on the Internet. Certainly there was a fair amount of spoilage on Twitter in the hours following The Avengers' earliest screenings, and it seemed that by the time the film actually came out most of the hardcore fans already knew the big surprises it had in store for them. With few advance screenings and a production that was kept remarkably mum, it's clear that Nolan and company are hoping that viewers go into the picture with as little advance information as possible.

The story also features a response from Fandango, saying that if you pre-ordered your tickets through their site and then re-sold them, those tickets are technically no longer valid for admission. While it's basically impossible to track, MTV notes that if you're paying ten times the face value of a ticket in order to see the movie three hours earlier, it's probably worth considering.

The Dark Knight Rises will be in theaters on July 20, with special midnight screenings at 12:01 a.m.