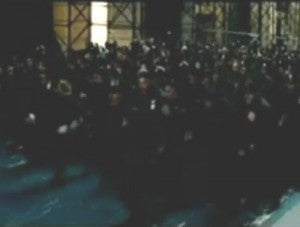 Police engaged in a riot with an angry mob and images of burning cars seems like an unusual choice of imagery to combine together in a commercial for a major sporting event…just saying. The NBA playoffs are currently underway, while the Dark Knight Rises premieres in movie theaters on July 20, 2012.