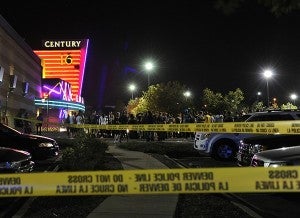 Warner Brothers, the studio behind The Dark Knight Rises, has issued a statement say that it's "deeply saddened" following an attack on one of last night's midnight screenings of the film in Aurora, CO, which left 12 dead and at least fifty injured. According to a local medical center, they have treated and released four patients there, leaving another 11 still at the hospital, including four in critical condition.

Police told NBC News that a man wearing a bulletproof vest (and according to witness reports, a gas mask) threw a canister of tear gas into the audience during one of the film's shootout scenes and opened fire. A suspect--24-year-old James Holmes--is in custody, who was reportedly found with the gas mask in his possession.

Initial reports were that 14 people had been killed, but the police later amended that number down. A three-month-old child and a six-year-old girl are reported to have been treated following the shooting, and at least one witness said that there were "a lot" of children in the theater at the time of the attack.

"I told my friend, 'We've got to get out of here,'" witness Jennifer Seeger told NBC News. "But then he shot people trying to go out the exits."

Witness Tanner Coon described slipping on blood, landing on what he assumes to be a body, and then making his way out of the theater with his two friends, including a twelve-year-old. He reportedly told the people he was with to "get down" when he heard the shooting start.

President Barack Obama called the shooting "horrific and tragic," while GOP frontrunner Mitt Romney issued a statement to the press that he was  “deeply saddened by the news of the senseless violence.”

"Warner Bros. and the filmmakers are deeply saddened to learn about this shocking incident," the studio said in a statement. "We extend our sincere sympathies to the families and loved ones of the victims at this tragic time."