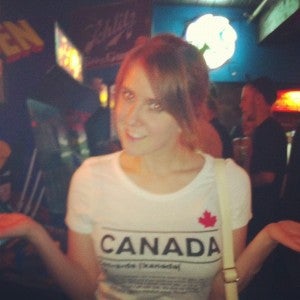 Jessica (Ghawi) Redfield, an aspiring sportscaster who was killed last night in the tragic Colorado shooting at a screening of The Dark Knight Rises, narrowly escaped a similar mass shooting at the Eaton Center in Toronto earlier this year, according to her blog.

At 6:20 p.m., Redfield's receipt places her in the Eaton Center food court, before she suffered what sounds like an anxiety attack and went outside. At 6:23 that evening, a gunman opened fire in the food court, where Redfield would have been had she followed through with her plans for the day.

Redfield's Twitter account, where she recounted the details of "coercing" a friend into joining her for the film last night, has been the subject of media examination, while the 24-year-old's brother and the man she took to the movie have both talked to the press about last night's events. Her guest, Brent Lowak, is quoted by Redfield's brother at MTV as saying that he was shot twice, and that Redfield was shot once, before the pair attempted escape and Redfield was shot in the head.

The story has been picked up by numerous news services since them, mostly focusing on the inspirational words she had for her readers following the June incident:

"I say all the time that every moment we have to live our life is a blessing," Redfield blogged back on June 5. "So often I have found myself taking it for granted. Every hug from a family member. Every laugh we share with friends. Even the times of solitude are all blessings. Every second of every day is a gift. After Saturday evening, I know I truly understand how blessed I am for each second I am given."

Watch: John Cena and AEW's Miro Hug It Out at The Suicide Squad's Red Carpet Premiere

My Hero Academia Reveals Izuku's Saddest Plea to His Class