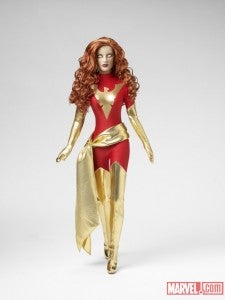 For fans of Comic-Con, X-Men and Jean Grey/Phoenix, this might come as a triple threat! One of Marvel's most iconic characters has a VERY exclusive doll coming to Comic-Con 2011. Tonner Doll Company's 2011 Comic-Con exclusive will be none other than Dark Phoenix, the super powerful and destructive essence that X-Man Jean Grey wielded for awhile. CEO of Tonner and artist Robert Tonner had this to say about the doll and the show, "As always, I’m very excited for SDCC. “I’m really into pop culture, and this is THE pop culture show to go to. It’s great to be a part of it, and we think that SDCC is just the place for the Dark Phoenix debut."

Tonner had always wanted to make a doll of Dark Phoenix, a character he describes as "captivating". According to the press release about the doll, it will, "boast hand-painted facial details, including mesmerizing mirrored eyes and fine quality variegated, rooted saran hair. She features a recently enhanced 16” high-quality vinyl and hard plastic body with 13-points-of-articulation for dynamic poses. Dark Phoenix’s meticulously crafted costume consists of a searing red bodysuit with metallic “Phoenix” emblem and attached gloves, thigh-high faux leather boots and matching gold sash with a “Phoenix” charm. A display stand is also included.

There are only 150 of these pieces available, so fans who are desperate for one are encouraged to visit the Tonner Doll booth, located at spot 4149. Go, and may the Phoenix force be with you!