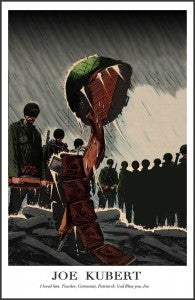 Celebrated cartoonist and graphic novelist Darwyn Cooke has a few things in common with Joe Kubert, the comics legend who tragically passed away this weekend aged 85.

They both tended, for different reasons, to work in the Golden and Silver Age of comics as their best-known environment; both men have distinctive and easily-recognizable cartooning styles; and both have spent the better part of the last several months working on DC's massive and controversial Before Watchmen project.

Well, Cooke took some time out of Before Watchmen and his Parker graphic novels to celebrate the life and career of Joe Kubert with the beautiful image at left on his blog earlier today. And now, we're sharing it with you, becuase...well, really, why wouldn't we?

The caption reads, "I loved him. Teacher, Cartoonist, Patriarch. God Bless you, Joe.