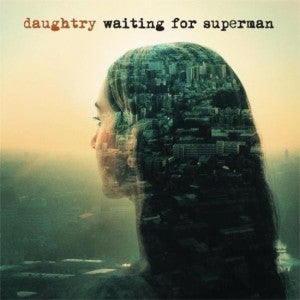 Rocker Chris Daughtry is a well-known comic book fan. He even describes himself as a “comic-book enthusiast” on his Twitter profile. Last year, Chris Daughtry teamed up with DC Entertainment to support their “We Can Be Heroes” initiative to help fight hunger in the Horn of Africa.

“Chris Daughtry is not only a true comics fan, but he has a real passion for helping others, which makes him a perfect partner for We Can Be Heroes,” said Diane Nelson, President of DC Entertainment. “We are excited to have such an influential advocate helping raise awareness for this initiative.”

Given Chris Daughtry’s appreciation for comic books, it probably should come as no surprise that the latest single for Chris’ rock band Daughtry has a superhero theme. As part of a social media promotion, Daughtry launched a page at https://www.daughtryofficial.com/us/superman to reveal the name and the artwork for his new single. When fans entered a message via Facebook or Twitter on the page, their profiles helped to reveal the artwork and title for the song.

With the promotion now complete, the title of Daughtry’s new single has been revealed as “Waiting For Superman,” which also happens to be the name of a 2010 documentary. In regards to the song, Daughtry tweeted, "I want ya'll to know the lyrics are inspired by real life experiences of incredible women. Women everywhere. Moms, daughters, sisters, friends. And I hope the message continues to inspire and be a source of strength."

Deadpool Manga Reflects on All Might's Legacy with an Avenger Burn

Fall Guys Update Adds One of Its Biggest Features Yet