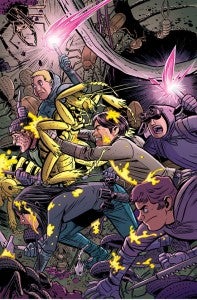 David Lapham, the Eisner Award–winning creator of the smash hit Stray Bullets, is writing and drawing his own series again for the first time in five years, debuting next month! Now, on the eve of Final Order Cutoff for the first issue, Dark Horse announces an original story to be featured in next year’s FCBD offerings!

Available for download today, and free for the next week, is the critically acclaimed storyline from the series debut in Dark Horse Presents, so fans will have the chance to see for themselves what everyone is talking about! Read the first chapter and tell your retailer that you are on board for this fun new series in the vein of The Goonies and Stand by Me!