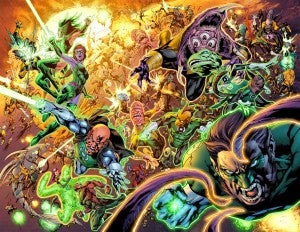 Today on DC Comics's blog The Source, the publisher announced that they will release a pair of new Absolute Editions. The oversized, hardcover editions are favorites with die-hard fans but too costly for many readers and DC Co-Publisher Dan DiDio has been critical of the format in the past. Coming in September, though, is Absolute Sinestro Corps War. Written by Geoff Johns, Dave Gibbons and Peter Tomasi and featuring art by Ethan Van Sciver, Ivan Reis, Patrick Gleason and Angel Unzueta, the story is arguably the most acclaimed arc of Geoff Johns's fan-favorite run on Green Lantern. Even the oversized hardcover, though, will still collect only the issues from Green Lantern, Green Lantern Corps and the Sinestro Corps Special and will not include the one-shots spotlighting characters like Superboy Prime and Cyborg Superman. Then, in November, Grant Morrison's critically-lauded Batman & Robin series will get the Absolute Edition treatment with Absolute Batman & Robin: Batman Reborn, collecting the first 16 issues of the monthly series as well as Batman: The Return #1. Featuring art by Frank Quitely, Philip Tan, David Finch, Cameron Stewart, Andy Clarke and Frazier Irving, it will likely be the most deluxe package readers ever get featuring someone other than Bruce Wayne as Batman, since the issues follow Dick Grayson and Damian Wayne's quest to find their way as the new Dynamic Duo following Bruce's death at the end of Final Crisis. It will also be the second Morrison-penned story in less than a year to become an Absolute Edition following February's release of Absolute Final Crisis.