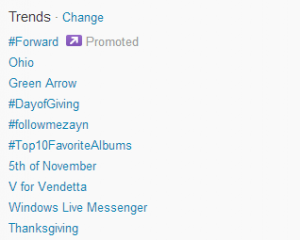 Generally, because of the relatively small pool of hardcore comic book fans in the United States, it's a challenge to get a ton of traction on social media sites for comic books and graphic novels. For the most part, when you see "The Avengers" trending on Twitter, it's because something just happened with the movie.

Today, though, the announcement that Jeff Lemire and Andrea Sorrentino would take over Green Arrow, the monthly comic book starring Oliver Queen, the lead character on the hugely-successful CW Network series Arrow, has powered that title to the top of the list, trending at #3 overall behind two key U.S. election phrases, one of which is "promoted," meaning that it's being advertised to ensure it will trend.

Green Arrow also comes in just a few spots above V For Vendetta, the classic 1980s miniseries by Alan Moore and David Lloyd, in which the anti-hero at the center of the story wears a Guy Fawkes mask. Fawkes was a Catholic revolutionary who participated in the 1605 "Gunpowder Plot," which took place on November 5. "Remember, remember the fifth of November" was a key part of the promotional campaign surrounding the 2005 film adaptation of Moore and Lloyd's comic, and every year the comic tends to get traction on this date.

The mask used in the comic book and movie has since been appropriated by a number of self-proclaimed revolutionary groups, including the hacker collective Anonymous and the Occupy Wall Street movement. The way the mask has broken into popular culture has been a key component of V for Vendetta's enduring appeal.

Watch this space for an interview with V for Vendetta artist David Lloyd later today.

ComiXology is also holding a three-day sale where readers can buy digital copies of V For Vendetta's single issues for 99 cents apiece.