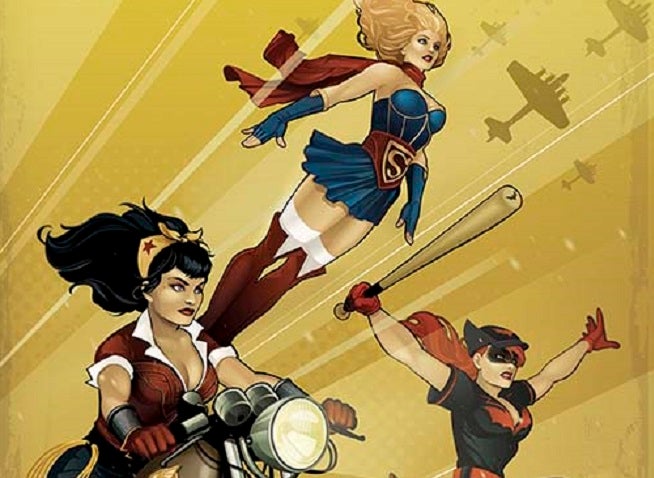 The DC Comics Bombshells designs pay tribute to World War II vintage and historical depictions of classic characters. The concept has become a huge hit with fans, and the company sees opportunity there.

For starters, DC Comics Bombshells will join the Digital First comic line-up with a new ongoing series. Digital chapters will be available starting in July with the first print collection available August 12.

Written by Marguerite Bennett and art by Marguerite Sauvage, DC Comics Bombshells #1 introduces retro-bombshell versions of Batwoman, Wonder Woman and Supergirl in an alternate reality where super-powered female heroes are on the front lines in World War II. The full line of Bombshells characters will be introduced as the story unfolds.

"DC Comics Bombshells is one of the wildest things I've ever had the pleasure to create--a story of the DC heroines, all the DC heroines, in a crisis that defines themselves as well as their generation," said writer Marguerite Bennett. "I cannot possibly tell you how excited and grateful I am to be involved in a story this massive and inventive. The series will explore war stories, romances, mysteries, heists, action adventure, and horror in a way that only these characters could do--I cannot wait for this book to drop. Pun very much intended."

"When I was contacted to work on this book, I was attracted by the retro style of the statues, not to mention the most iconic female characters of DC are represented," artist Marguerite Sauvage said in a statement. "And then when I read Marguerite's script, I was really excited and totally convinced by the story, the tone and the universe and time it will take place. In terms of artistic approach, I focused on page layouts and more on graphics than on a realistic approach. I spent a lot of time searching for references to be as accurate as possible to the story and habits of this time period, but keeping in mind it's a parallel universe, so I can take some freedom on details."

Also in August, the newest wave of Bombshells will be featured as the variant cover theme for DC's print comics.

Continuing the success of the bestselling statue line that started the Bombshell trend, DC Collectibles is adding Cheetah and Killer Frost characters to the Bombshells line. Designed by Ant Lucia and sculpted by Sam Greenwell and Tim Miller respectively, these new statues will hit stores in Spring 2016.

Players of the PC and PlayStation game DC Universe Online can also expect to see playable Bombshells Legends characters, in addition to a unique new Episode for players to jump into action alongside them.

You can check out a cover gallery below via The Mary Sue, HitFix, Newsarama, Nerdist and Paste)