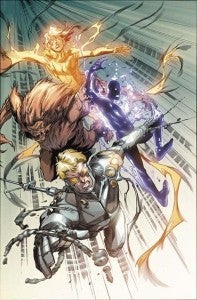 DC Comics's solicitations, released today, show that the final issue of The Green Team: Teen Trillionaires will be released that month, ending the first of a pair of thematically-linked and politically-charged series that kicked off in May. Says the solicitation, "Through thick and thin, the Green Team has endured more pain and suffering than any teen trillionaire can withstand. Will this final issue be their breaking point?" Of course, the series is a product of Art Baltazar and Franco, who are pretty busy at the moment. Did they have a chance to end their story organically? Does Gail Simone's companion series, The Movement, really sell that much better that one of the two would end and not the other? Or is it just that with Tiny Titans making a comeback, there's only so much that Baltazar and Franco can do and DC opted not to go on without the creators?