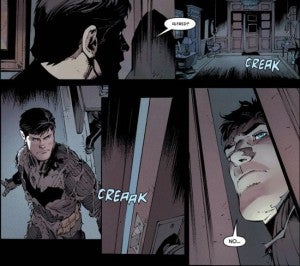 DC Comics shook things up with the New 52 over a year ago. Since that time, they’ve been gradually introducing shocking changes to keep readers and the press interested. One change was the elimination of Clark Kent and Lois Lane’s relationship, which paved the way for Superman’s new romance with Wonder Woman.

Now, it looks like DC Comics is gearing up to drop its latest shocker. It has been widely assumed that someone close to Batman will die in the “Death of the Family” storyline that is running across the various Batman family titles. However, no one has known for sure who the Joker’s likely victim will be.

In the “A Death In The Family” storyline, which took place in the eighties, the Joker murdered Jason Todd, the second Robin. Since continuity was rebooted with the New 52, many have speculated if one of the Robins could meet a similar fate in “Death of the Family.” However, killing another Robin might be too obvious of a move for DC Comics.

If teaser pages released on Buzzfeed for Batman #14 provide any indication, the Joker might have set his sights on another member of the Batman family. After returning to the Batcave, Batman calls out for his loyal butler Alfred, but surprisingly he receives no response. An unmasked Batman wanders through Wayne Manor looking for Alfred, before he looks through a creaking door and exclaims, “No.”

The teaser for the issue asks where Alfred is and what plans could the Joker have in store for Alfred.  DC Comics certainly seems to be suggesting that Alfred could be the Joker’s victim in “Death of the Family.” Of course, things are often not how they first look like in comic books, so the Alfred hint could be just a tease to protect the identity of the real victim. What do you think? Will Alfred die in Batman #14?