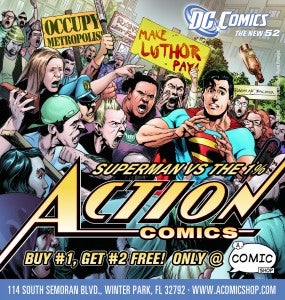 Just over a week ago, Bleeding Cool ran a graphic, produced by A Comic Shop in Orlando, Florida, which re-lettered some of the protest signs appearing on the cover of last week's Action Comics #3 to present the anti-alien protestors as, instead, Occupy Wall Street protestors. With "Occupy Wall Street" and "Make Luthor Pay!" signs, the image was captioned "Superman Vs. the 1%" and was used as an attention-grabber when run in local newspapers. Because of DC's big push to help retailers market the New 52, the publisher paid for 75% of the cost of running the ad, with A Comic Shop picking up the remainder. While the publisher had nothing to do with the changes made to the art or the caption of the ad, it generated a mini-controversy over at Bleeding Cool and a few other places around the Internet because DC didn't object to its content. The publisher's policy, according to the Bleeding Cool story, is that they'll cover 75% of any ad by a comic store which features only DC product and highlights DC Comics as the focus of the ad. This ad met those standards and was therefore covered. Most people paid it no mind, as even the owner of the comic shop joined the conversation to remind readers that it was he and not DC who put it there, and that it was done as part of a marketing campaign, not any personal political statement. There is of course the idea that Morrison's Superman is more of a "hero of the people," in line with his Golden Age counterpart, and therefore has been called a "socialist" not just by critics of the book but by Morrison himself more than once. Still, since the comic has been very good, and since the targets of Superman's "socialist" ire haven't been particularly controversial as yet, most readers remain unfazed by that and it hasn't really picked up a lot of steam as a serious criticism of the title.

At any rate, apparently DC must have decided that A Comic Shop had the right idea--while the ad at left may not have been "official" in any meaningful way, DC sent out a newsletter today promoting Friday's hour-long premiere of Green Lantern: The Animted Series. The subject line of the e-mail? "Occupy Oa: Green Lantern Cartoon Network Premiere." Just below that, an image of the Jim Lee-redesigned Justice League along with the tagline "The Official Newsletter." The subject line is unrelated to the content of the e-mail, which (among other things) announces the premiere date as well as the November 30 release of Green Lantern: The Animated Series #0, a comic book by Tiny Titans creators Art Baltazar and Franco with art by Dario Brizuela. It doesn't mention or allude to the protests in any way, other than the subject line, but it certainly succeeds in catching the eye when DC Comics (owned, of course, by Time Warner, one of the largest entertainment conglomerates in the world and the owners of CNN) invokes a grassroots movement that's largely widely perceived as anti-corporate to promote its products.